Silver Heels sounds so much better then "Mohawk Bob"...At the Eastern Door review 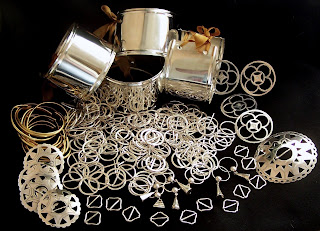 Ward Oles Silver for Colonial Williamsburg...I need to place that order for myself 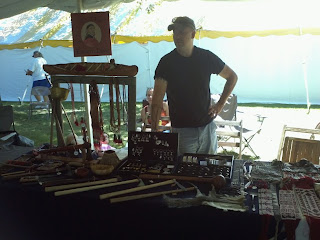 Ward at Dixon's gun fair....he should be rockin a mullet 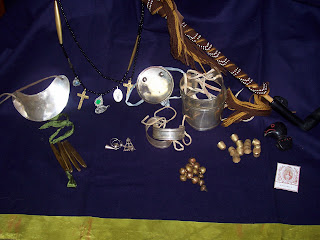 Part of my stash of Ward stuff...bells, thimbles,hair tubes, Pipes...My better half hates to see stuff in the mail from New mexico

So it seems for the time the floods and earth quakes have stopped. But the steelers lost to the ravens and thats worse than all the plagues of Egypt...I love football season...It means, well football to watch, but it also means actual sanctioned hunting seasons are just around the corner. Also I use Sunday football as an excuse to work on stuff for myself (i.e. things I tell myself I'm going to keep and never sell but always do) So this season my goals are a new tumpline, a copy of the Caldwell bead strap and the caldwell Net sash (started it during the ravens game glad its tied to a weaving stand that way i dont have to walk far to pick it up when i throw it.) I'm kinda on a caldwell kick for reasons that will manifest later (no Alec I'm not trying to steal your Caldwell garters)
SO since I feel like keeping it light today (i.e. not keep the long knife ball going for a minute...) I thought I'd post a product review/interview with Ward Oles of "AT the Eastern Door". As well as few Tid bits I've come across in the past few days that don’t quite fit an entire post.
I've known Ward for a long time (dam we're getting old) so in all fairness this isn't an objective review. Lucky for me He doesnt make historical weirdness so this is easy. Personaly what I like about dealing with Ward is the fact he's not making the same standard gear all the time. Trade silver, brass thimbles, pins, pipes, Sleeve buttons (cuff links), War clubs...Lol the list goes on and on. Any of the details that really make a person’s impression stand out in my opinion Ward does a great job of nailing down. Plus he's really good at dealing with the late night text message from a blurry eyed friend who suddenly has decided he needs a dozen thimbles (i think that only works if he's stayed with your very understanding family) So here is the interview:

So when we met you had a pretty killer mullet, any chance you’re going to grow it back?

Yep, you are right! I had a "mullet" and my kit was horrible by current standards, actually, by any standards....and no, the mullet ran away.

Runaway Ad: May, 10th 1996
Harold "Harry" Mullet, formerly employed as a sweat mop, ran away this very day, taking with him a copper gorget, oversized striped shirt of green and yellow linen, a pair of commercially tanned leather leggings bound in red felt, and a 2nd land pattern British musket. When found, he is to be shot on sight and a bounty of 25 cents will be paid for doing so, as I do not care whether he is returned or not.


What got you started in this crazy weird world of history?

Short version?.....I've had a love for history most of my life. As a small child traveling with my family to historic sites from Ticonderoga to Valley Forge, I listened to my Grandmother tell stories of my mother's side of the family and their participation in the Rev War....then at 21, I dove head first into this crazy world of reenacting at F&I Fort Ti the year before I met you at Fort Frederick.


SO can you describe the research process you use when your thinking of making an item?

Well, after pouring through thousands of image files and research docs, there are generally two approaches. One way is discussing the object or objects with fellow researchers and come to a conclusion as to whether or not it's worth the pursuit, whether the materials are available, what skills or techniques will need to be learned or experimented with, and how much time it's going to take to complete the project. The other is to "sleep on it" for a few days/weeks/months, and then all of the necessary "skills" will simply manifest on their own, then I'll jump into the project making all of the mistakes, wrecking perfectly good material, and doing all of the adjustments in process.....and hope it turns out.

You make everything from Correct pins to war clubs. I’m pretty sure you look at more 18th century Garbage then a hobo, What makes you pick certain offbeat items to reproduce?

I try to make things that are consistently common in the 17th and 18th century, yet are lacking in the contemporary living historian's base of material culture. So for example, you mentioned pins....extremely common in every context, yet on a contemporary level, many people are limited to fantasy items sold on the "general" market. I felt this was not fair in the interest of a proper period impression, so I researched pins; commonality, (who was using them), archaeological finds and reports, methods of manufacture from the 15th century to the 19th century, packaging, etc. ....then figured out how to not only produce them, but to do so in a way that makes them reasonably priced and readily available to all.


What products do you have on the slate?
Right now I am focused on filling orders, but on the side I am working on 2 new thimbles (c.1660 and c.1750), "Tallio" sleeve buttons, "Paste" intaglio rings, and "Liberty" Sleeve buttons, working with a Turner on an 18th century boxwood tape measure and treen canteens (rumlet), and there's always room for more ideas on the bench. Many of these are back burner projects that fill in the "down time" when I get burnt out from one particular medium or another.

Your silver and pipes have the right look and feel of period items. How important is handling original pieces in your research?
It's extremely important to view and handle original artifacts first hand whether in a private collection or by way of appointment with curatiorial staff in a museum setting. It is an all too common error made when "reproducing" an item to make it too big. This happens when looking at an image of an artifact with no size reference, no visual aid for referencing scale, no understanding of the objects actual physical properties, or a bit of all three. Early on, I certainly made some chunky, over-sized, and relatively goofy stuff......and I learned very quickly to focus on the fine details and the importance of quality documentation.


Is it true you keep Eli Motsay in a small cage in your workshop?

....Hahaha, I had to let him out. But, I did put the cage to good use, I took the door off and made a condo for the shop gnomes that make everything while I sleep. Jobu is their absentee foreman and despite this, keep them working steadily and efficiently.
(*Eli is an awesome quillworker check out the Makers Blog for some examples of his work)

SO what do you feel makes a quality NA interpretation?

As with ANY impression....DOCUMENTATION and understanding the material culture is key!!! When one starts down that path, any preconceived notions or Hollywood pop culture ideas need to be put in the circular file. With regard to a Native impression, you are interpreting an 18th century culture and modern people who have managed to survive all manner of conflict and hardship, to which deserves the utmost respect. An ACCURATE interpretation, quality of image, ability to interact with the public and the ability to present information are all things to consider and are extremely important when "representing" ANY group/people/culture. Too many people try to take the Native route because they think they can do it "on the cheap", however it is in fact one of the most costly to achieve if you are looking to do it right....and I'm not just talking cash.

Seriously You gonna grow the mullet back?

If your looking to contact Ward right now your best bet would be to Check out his Facebook site (at the eastern Door) or drop him an email attheeasterndoor@yahoo.com
So here are a few tidbits I've read or reread over the past few nights I thought folks would dig.
The First is From the Journal of Thomas Ashe when he was traveling thru the carolinas in the 1680's. Yes its a bit early for what most of us do but any detail about SE natives is a god send:
Thomas Ashe 1682 "the indians in carolina parch the ripe corn,then pound it to a powder, putting it in a LEATHERN BAG: when they use it, they take a little quantity of the powder in the palms of their hands, mixing it with Water, and sup it off: with this they will travel several days."
So there you go Joseph an account of cornmeal in a leather bag...

The next tidbits came from the Moravin Journals. The first is..well just killer. I’ve been compiling a list of native names to try and show folks that names like “Crystal rainbow woman” are…well lame. So far the favorite names are “the earl of Hell” (aka Jason m. lol) “cheesecake”, “robin Hood”, Buffalo James Smith and a lot of folks name “Jammie” (as in Chickisaw Jammie, Mohawk Jammie) and now one more name of a guy you don’t want to meet in the Dark:

June 20 Loskiel states that Tocanonite, an Iroquois sachem, was called the "Black Prince" because his chest was literally black with a network of devices and designs,tatooed into the skin with gunpowder"

And a note from the journal for all you French “praying Indians”:

"afterward he explained to us that the War archives which we had found on the trees, had been painted by french indians, (their paintings can be recognized by the crosses which they paint on them), when they made war upon the cherokees and brought back prisoners from them"

So gang I should be getting back to Marathon weaving…I’m getting fast with this tiny Yarn. Now to try and keep my ADD from side tracking me into matchcoats…or google books or shooting my gun or……wanna ride bikes?