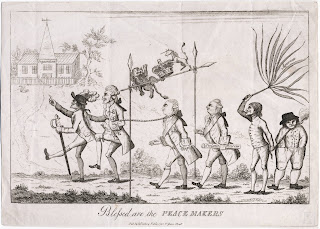 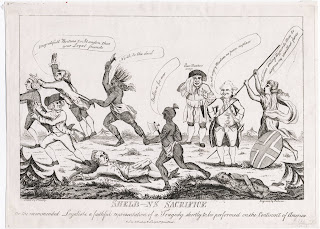 Political cartoon...but check out the sheath knife and apron....
I think it's Eli in the front 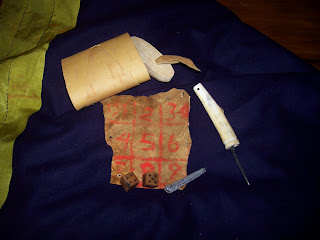 Shut the box game board....had to make an awl...gotta keep up with Ike

Ok so now I’m jumping into the debate a little more on the idea of what the term “long knife “ meant. I really don’t see why the use of it to describe a type of person is such a big deal. So as not to seam backhanded or confrontational I’d like to keep all my thoughts/comments out in the open. So that they can be criticized by...well anyone. I’m a big believer in keeping the debate civil and am very willing to admit when I’m wrong. I feel one of the big problems with the reenactor msg board world is too many ppl hide behind a screen and throw torches at each other. One of the few people to counter my points out in the open is the author John Curry. And this has been talked about between us in person and on the msg board “the Colonial Frontier” (can be viewed here http://thecolonialfrontier.proboards.com/index.cgi )
To further show that clothes did make the man (in a cultural sense) in the period all one need to do is look at the simple statement made by Kentucky pioneer John Hedge “ you could tell where a man was from on first seeing him.” This theme is played out time and time again in the backcountry. Daniel trabue noted marked differences between the “tuckahoes” he traveled with and the “cohees” he didn’t quite to like as much. In drapers works you see comments on the difference between the “dutch” and everyone else as well.
To the non settler there is even a marked difference between the “Virginians” and people from “pennsilvania” (his spelling not mine) that matches up to the ideas used by both settlers and natives. This is from a letter of an unnamed british officer to a friend describing his journey on the ill fated Braddock campaign:

May 1755 (Wahl, Braddock Road Chronicles) page 203
“The fellows who drove the wagons, tho they would have made but a shabby figure among our Hampshire carters, yet here they look like angels compared with the long, lank, yellow faced Virginians, who at best are half starved, ragged, dirty set; if by accident they can clear enough by their tobacco to buy a coat, they rather chuse a half worn gaudy rag, than a substantial coarse cloth, r Kersey; They are the very opposites to the Pennsilvanians, who buy cloth coats of cloth so strong as to last as long as the garments of the Israelites in their march through the Desert; a coat serves a man for his life yet looks fresh, but this comes from them never wearing them at home; when they are out of sight the work half naked. They are a very frugal people, and if not so would be as beggarly as their neighbours the Virginians.”


So apart from the constant points that pop up showing the use from the 1680’s as the name used to describe a “Virginian” because of where they came from rather then the use of a “long knife” (the use of which I’m not debating…a lot of cutting tools on the frontier, long, short, mass produced and local made) we see that even anglos in the period based their ideas of where a person was from on how the person dressed. I also realize that by this point in the debate some folks have dug their heels in and will not bend no matter how much info is put out there (i.e. dead horse to beat) but as I come across more info I’ll keep stacking it on the dead horse. While it’s outside the scope many in the hobbie want to go (lets face it your probably more obsessed with looking the part then trying to understand societal views of 18th century subcultures and to be honest I’d rather have a guy along on a scout that can build a fire then a guy who can do nothing but point out 18th century accounts of washing habits…I’d still take both on the scout though ya need something to talk about around the fire when it’s raining). If your looking for a good book to read that deals a little with this idea check out: Contact Points: American Frontiers from the Mohawk Valley to the Mississippi 1750-1830
So while taking a break from weaving the other day I came across a site that will save me a lot of money and take up too much of my time. The Filson Club has it’s quarterly posted online. There are a lot of great articles there and will be sure to eat up your lunch hour.

http://www.filsonhistorical.org
While going thru some articles I came across the clinkenbeard interview and its funny how stuff pops up at ya when you reread it. I thought this quote on natives using wadding and preplanned ambushes from a fence was pretty kewl:

“We had saw also where they had stuck in leaves into the fence to hide the cracks in the fence, from behind which the Indians hid and shot Donalson. Found part of that indians wadding, or wipings of his gun, that had shot Donnalson”

Gotta tell ya every account I read I’m pushed more into the no patching camp for smoothbores.

So since it’s been raining like crazy and I’m thinking of just what to do if I take Riley on her first scout and It rains. (Do you want to be stuck in a brush hut with a bored 10 year old?) I made up a back country version of the “shut the box “game. I got the idea/rules from Mary Tully’s book : “A brief Discourse on 18th century games . I made the board up using a scrap of brain tan and hide paint. The dice were a gift from Ward Oles (my friends always give me stuff to gamble and drink…are they trying to say something?) and a lead pencil I made last summer during my lead miner phase. I’m using a birch bark box to store the whole kit in (and act as a dice cup). So hopefully this and a deck of cards will keep the Justin Bieber comments down in the rain.
I put some period images up to put into your brains. Ranger caps, short jackets and a sheathed knife on a butcher enjoy…..
So back to weaving and…well weaving. I’m planning on heading out to the woods in the morning and with the rain my blanket coats are looking way sweeter right now.
Posted by Nathan Kobuck at 12:16 PM