Some thoughts on Garters...or If ya call them Leg ties Wallace will punch you in the face. 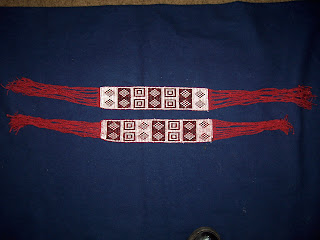 Garters based off pair in Ben West Collection......Research By Dr. Stephenson points to the fact some of West's props came to him from Bayton, Wharton and Morgan 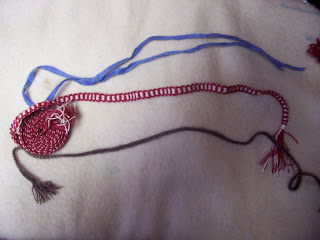 Tapes....top is linen, Middle worsted and bottom is dogbane and buffalo wool......and whats the deal with ppl weaving this stuff out of silk or cotton?

Wow it finally snowed here in Central Pa. and I got to use my new sled. Of course it was me and my daughter sledding down the sidewalk in front of the house to the confusion of the Bar goers across the street but I got to use it. I’ve been in full bore weaving production here getting ready for the upcoming show in Lewisburg. I’ve also been working on some bigger projects to show off my weaving (i.e. stuff I’ll keep for once)
One project I’ve started is based of a Purchase by Alexander Mckee in the BW&M papers. I’m calling it the ultimate breechclout:

Now these could have just been odds and ends he was purchasing but I decided to turn it into a breechclout as I find ppl often purchase the ribbon/beads etc when they purchase breechclouts/leggings. I also thought about sewing up a “hood” using this list but I went with something I would use. I’ll post some images when it’s finished.
One document I’ve been working on is a basic cost of what my “dream” kit would cost based on the Fort Pitt records. This way I’d have a basic idea of just what all the stuff I’m carrying cost vs. how many deer I’d need to kill to purchase it (my shrub/small beer tab alone would kill all the deer in the county)
So to wet your appetite for that posting here is the cost of a common native kit:


SO one question I’ve received a few times over the past few weeks is about the proper Garters for a long hunter. Well my general short answer is “I don’t know but I’m pretty sure they don’t look like those leather tab woven cloth things”. And while this answer is a little….lets say flippant. I gotta say I have yet to have anyone show me solid research to prove me wrong. The BWM papers are full of accounts of purchases of cloth, ribbon, lace and gartering of ALL kinds. The problem is in a lot cases is the mundane items like garters don’t always have a good description of the type of gartering.
A good source to see period examples of gartering is in Florence Montgumery’s book “Textiles in America”

Ok I can hear folks now….not everyone went to a store…blah blah blah…In Kentucky We…blah blah blah. I get it ,so just keep doing what your doing no skin off my ass…But let me continue. The images in Montgumery’s book clearly show different type of gartering that were around in the 18th century and can give you an idea of what could have been purchased at a store such as the BWM store at Fort Pitt and Kaskaskia. I know Susan Wallace of Silver Shuttle has reproduced some of this gartering but I don’t own an example to comment on.

Now for specific garters purchased by Fort Pitt Long hunters I can point out some references that may help. Simon Girty bought a pair of "garters from an Indian" in April of 1767 for 5 shillings (for as native focused as ppl want to make Girty this is the only native thing i found him buying) SO my first thought was “dam those are expensive garters”. especially After I found William Baker purchasing a pair of garters in May of 1767 for 2 shilling. But the more I dug the more I found the prices in listed garters were all over the place. I found it also matched up to the prices listed for “gartering” being purchased with items such as leggings.

SO from what I can find Garters being purchased by the hunters are either Native made or more then likely made from the many different types of “gartering” being brought into the store. Now for a little info on the Native type of garters. Yes I know this blog is as clear as mud but honestly so are the records.
If you’re looking for a pair of “native” garters what I would recommend is doing some reading on the Native weaving from the region your portraying. For example a hunter dealing with Cherokees/creeks more than likely would not be sporting a pair of quilled garters as Southeastern garters tend to be finger woven or bead twined .Also for someone portraying a pre rev war hunter should look for something done in the oblique weave as the majority of Pre rev war items are done in this type of weave. (check out the post on SE native stuff for some good examples of native garters)
Another option is an item that is way underrepresented in my opinion is the simple Tape loomed garters. Tape was a common item that would be woven at home during the period and a solid option for folks who don’t feel that they would have gotten to the “store”. In the spring I finished myself a pair of “Kentucky” tape garters. I used natural cordage as a weft and buffalo yarn as a warp and made a civilized looking tape (just because its country made doesn’t mean it needs to be ugly)
SO there ya go some garter info mixed in with a whole bunch of my blah blah blah. And don’t forget cloth strips or deerskin lace makes the cheapest garters you can find….. time to go hunting
Posted by Nathan Kobuck at 11:28 AM No comments:

I bought a broken knife....why does that make me so happy? 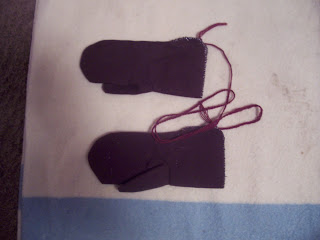 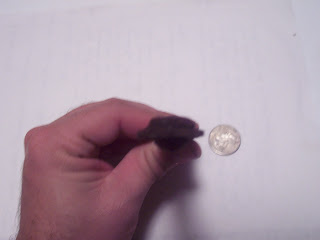 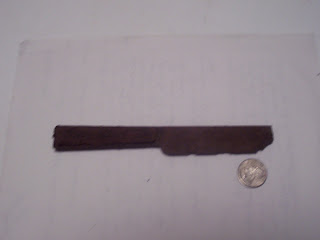 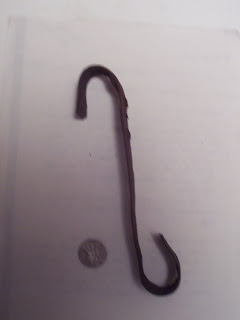 So winter is here and in my part of the world that means…No Snow. So far we’ve been lucky (or unlucky to the guy with the new sled) and been missed by pretty much all of the big storms. So as a result I had to tweak my winter scout plans and really pared back on what I took. I’ll write more up on this later as right now time is a factor for me. I was able to spend A LOT of the “xmass” break in the woods and have to say most of my new gear really worked out well in the bitter cold.
One Project I finally finished was a pair of mittens. I cut these out about 3 years ago and they sat in my project bin until just before xmass. I made them from thick Brown wool fabric and used the Kannick’s Korner Pattern for them. I have found both Mittens and gloves being purchased by Morgan’s hunters So I opted for Mittens. I attached a “dummy string” to mine so that well….I don’t lose one. I really recommend the Kannick’s Korner Patterns for anyone wanting to either upgrade their gear or just try their hand at hand sewing. The Patterns include instructions on basic stitches and all the documentation they have for the item. www.kannikskorner.com/pataccess.htm

In between projects and hunting over the past few weeks I’ve been doing as much reading as possible. I started rereading “Forty-Four Years of the Life of a Hunter” By Meshach Browning. I find when I reread books a few times I pick up little details I missed the first 10 times lol. I also picked up a few “Shire Books” on sewing equipment and money. These Little booklets are chocked full of information and images of originals. You can learn a lot on everything from clay pipes to knives and the Bibliographies are great. Many historic sites carry these books (usually near the toys but they aren’t just kids books). Check out their site the books are inexpensive and worth the money. Shire books http://www.shirebooks.co.uk/home.aspx these are awesome to read on a lunch break.

Another Book I picked up over the holidays was “Some Thoughts on Scouts and Spies” By Gerry Barker. I’ve been able to spend some time in the woods with Gerry and He’s a great guy and really knows his stuff. Gerry’s book is a blend of his real world military experiences and historical info that is meant to help folks who wish to portray an 18th century “spy”. I feel though it’s useful to anyone portraying frontier militia/hunter/native. One Paragraph that really struck me as relevant in the “msg board” world:
“Most of us are not very realistic in our choice of the materials of scouting. For some reason there is more interest in filling our packs than there is in filling our list of skills. Consequently we are over armed, over equipped, and over fed.”
I know I’ve been guilty of this quite a few times on scouts/marches. I picked up my copy from Bob Browder at Longhunter Leather Company. So if you’re looking to get a copy drop Bob an email I’m pretty sure he has more in stock.
Also one more Item I picked up before the holidays was another original Knife. This one has a broken blade but the kewl thing about it is a lot of the handle was still attached. It has a full tang and the handle was held on with three pins. I was also able to pick up a barrel band Pot hook. That’s right a native site pot hook. I have seen these from euro military sites but never a native site (or else I just never noticed) anyhow I’ve posted a pic.
Oh and In the self promotion department I was recently approved for the 18th Century Artisan Show in Lewisburg, Pa on February 4 & 5th. This will be my first year at the show but I’ve heard nothing but good things about it. If your at the show stop by and say hi. I’m sure the usual cast of misfits will be hanging around the table (Crowder will be the one with his head in a book or looking into space trying to figure out how to sew an 18th century hot air balloon)
www.18thcenturyartisanshow.com

Posted by Nathan Kobuck at 9:28 AM No comments:

Email ThisBlogThis!Share to TwitterShare to FacebookShare to Pinterest
Newer Posts Older Posts Home
Subscribe to: Posts (Atom)
Let me know what you guys think drop me an email at Thebuffalotrace1765@gmail.com