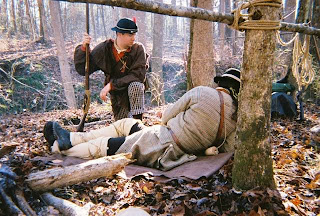 Rush Blady (laying down) wearing wrappers at the Cowpens event 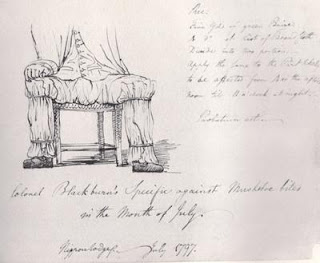 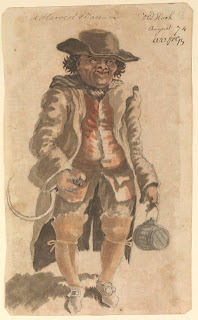 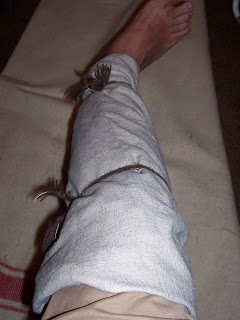 Hemp leggings with Buffalo wool tape at ankle and knee 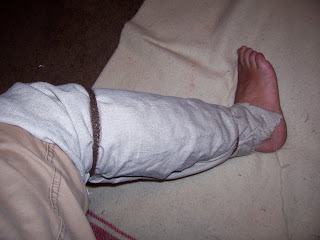 Side view of hemp leggings...note seam up the back

Well I guess I need to post something useful today to keep this blog relevant. With all the weirdness being spouted out the idea of the “long knife” in other forums I’ll try and tackle a little bit about the oft debated cloth leggings (from the info I have been able to find) This info is also not taking into consideration the use of gaiters/half gaiters/trousers by the working class to protect their legs while working. ….Ok some Ti Chi stretches and here I go.
Ok so I have been able to find that non wool leggings aren’t that uncommon (shock and disbelief) the problem is that they are not simply Indian style leggings made out of hemp/linen cloth. If you dig thru Period narratives and runaway ads you find them being mentioned on a regular basis. The problem is that they aren’t always referred to as leggings. In the period the term “wrappers” seems to be used to describe the garment used to protect a person’s leg while working. These can be made from linen or wool cloth. Here are some examples from Virginia Runaways:
AUGUSTA, Nov. 16, 1768. RUN away from the subscriber in Augusta, on the 1st of this instant, a convict servant man named THOMAS KERR, who had on when he went away a new felt hat, a light blue cloth coat, a purple coloured vest, a coarse shirt, old leather breeches, woollen stockings, a coarse pair of linen wrappers, new shoes, and a pair of large brass buckles; he took with him a woman's shift, one sheet, one coarse apron, and three deerskins in the hair; he is supposed to have taken with him a short rifle gun, and some ammunition. He is of a middle stature, and a fair or sandy complexion. Whoever secures the said servant so that the owner may get him, shall have THREE POUNDS reward. JOHN BOTKIN.

RUN away, without any known provocation, the 19th of November, 1770, from the subscriber, near Orange court house, Virginia, four likely Negro men slaves, to wit, SAMBO, alias SAM, from Africa about 19 years ago, about 32 years old; the other three are Virginia born; EDOM is aged 22, and BEN and TOM about 17 each. They have got new cotton suits, capes to their jackets, and cotton wrappers to their legs, shoes of stiff leather, hind quarters entirely without seam, and the bottoms very broad and nailed. SAM is of a middle stature, large over, and stooping in the shoulders, has had for some years past an excrescence or swelling under his left ear, his back marked by whipping when young, though much indulged lately; he carried with him an old grey fine cloth coat, a brown linen ditto, a blue stuff jacket, white shirt, a kind of laced hat, with a black band, &c. a box to carry part of his cloaths, talks badly, though a sensible artful fellow, and is a tolerable blacksmith. EDOM is tall, straight, more yellow than the others, took with him green bound cloth wrappers, gray sale stockings, one of them patched, has dyed his cotton jacket brown, and put pockets in and cuffs to it. BEN is rather tall of his age, his wool low down his forehead, eye-brows large and prominent, appears to be swelled about his eyes, though natural, and has a jacket of the same cloth of Sam's coat. TOM is not so tall as Ben, middle sized of his age remarkable large feet, long bony face, large teeth, and apt to shew them, lisps a little, and has an old felt hat, part of the brim burnt. Any person or persons that will secure, and contrive intelligence thereof or convey to the subscriber's house, all or any of the above mentioned slaves, shall, according to the service, &c. have an immediate AMPLE REWARD. JAMES WALKER


Period artwork and some journals point towards the use of the “legging”, “wrapper” or “country boot”. An interesting account is in Nicholas Creswell’s Journal. While he is in the Laurel Highlands he is advised to wear “leggings” tied at the knee and ankle to protect him from snakebites. A few days later when he is being outfitted under the mentorship of the Trader Anderson he has a pair of “Indian Leggings” made up. This to me points out a difference between the “legging” the locals are wearing to the “Indian legging”.
The garment also pops up in some period artwork. An interesting sketch by Benjamin Latrobe done in the 1790’s shows clearly how to wrap the leggings and tie them. It also mentions how they are used to keep insects away. An image from England in the 1770’s shows the garment in use by a reaper.
For my interpretation I simply used 2 pieces of stout hemp/linen cloth 36 inches wide by 25 inches long. I did a rolled hem on the edges of the cloth to keep it from fraying (no self fringe here). To wear the legging I simply placed an end on the back of my calf and wrapped the cloth around my leg. I secured the legging at the knee and ankle with a piece of tape or leather cord. I have worn this set up on a few scouts and it works out pretty well for keeping your leg covered. Personally I didn’t see a difference in hot much heat this set up holds in versus the Indian style wool legging. SO if your going to stick to the mindset of hemp leggings for “long hunters” this is an option based in documentation and well…works
Posted by Nathan Kobuck at 11:53 AM