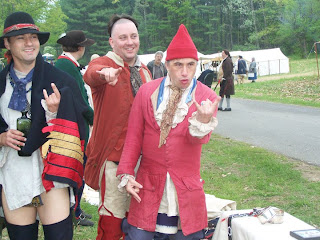 quillworker Eli Motsay, Myself and Super Model Jamie Pennisi...if he doesnt look familiar then you didnt buy a copy of Muzzleloader in the 90's....We Like "ze Blach metal"

Some ideas for "hair stuff" and scalplock size/length
I’ve given up on winter. I don’t care anymore. So now I’m
going to focus on killing turkeys…they still exist right? Time to start sewing
linen. After looking at my gear recently I realized that I’m looking more like
a homeless person then a trader. Breeches are shot, shirt is falling apart. So
now its time to start those projects like it or not. Blah…at least I’m ready
for next winter.
SO to keep things going on the Head gear thing I’ll cover a little bit about
scalplocks and stuff to tie in them. Maybe here I can keep Portuguese quillworkers
from sidetracking the issue (funny how the folks who never shaved their heads
always have the most to say about why you shouldn’t try harder..just sayin)
The most common form of hair style for 18th century natives in the northeast
is the Scalplock (or top knot ,hari Krishna cut whatever you want to call it)
This is simply a small tuft of hair left on the crown of the head. One of the
Best descriptions of this comes from James Smith’s oft quoted narrative:
“All the hair clean out of my head except a small spot about three or 4 inches square on my crown; this they cut off with a pair of small scissors”
Smith’s dimensions seem to be pretty consistent across the board.
Robert Rogers as well as a few others mentions the comparison of the diameter
of the scalplock to the English crown (coin not the kings crown) The Crown used
during the majority of the period has a diameter of 38mm or roughly 1 ½ inches. A good view of a crown can be seen
here:
http://british-coin-price-guide.homelinux.com/Crown-Coin-Price-Guide_files/Page1863.htm
From
images and descriptions we can see that the hair isn’t really that long. Rough
estimate is between 1 to 6 inches long. A detailed description can be found in
Pouchot’s Memoir:
“They do not wear
their hair longer then a priests calotte*, cut an inch long( roughly 1.9
inches a French inch in the period being longer then a modern American inch), covered with grease and powdered with vermillion in the middle. They leave two locks of hair, which they fasten by 2 silver clasps of a fingers length, or in a que made with a border of porcupine
quills. They arrange therein also, some feathers of birds forming a kind of
tuft.”
*Calotte-Skull cap worn by priests

This description for me is pretty kewl as it mentions a little about natives
painting their hair. SO now that we’ve established the general size of the
scalplock lets look at some of the items to wear in it.
“some pluck out and
destroy all, except a lock hanging from the crown of the head, which they
interweave with wampum and feathers of various colors” Peter wlliamson
1750’s Pennsylvania
”excepting three
locks,which they dressed up in their own mode. Two of these they wraped round
with a narrow beaded garter made by themselves for that purpose, and the other
they plaited at full length, and then stuck it full of silver brooches.”
James Smith
“And tied a bunch of
red feathers to one of these locks they had left on the crown of my head, which
stood up fix or six inches” James Smith
“Then he shaved my head leaving only a small tuft of hair upon the crown and to small locks,which he plaited with silver brooches interwoven, making them hang over my face.” John Rutherford 1760’s Detroit
“Pluck from their heads all of the hair except from a spot on top of it, About the size of a
crown piece,…On this are fastened plumes of feathers of various colours with
silver or Ivory quills. The manner of cutting and ornamenting this part of the
head distinguishes different nations from each other” J Carver
“The head is all shaved only the crown which is left for the scalp. The hair in this has a
swan’s plume or some other trinket of silver tied in it.” Rev. David Jones 1770’s Ohio country
“They Wear an oblong piece of white tin in the hair which lies on the neck. One of those I saw had taken a flower of the rose mallow, out of a garden where it was in full blossom
at this time, and put it in the hair on top of his head” Peter Kalm
“Their Hair cut except on the crown which is tied up in a bunch and hung down in a plait, mixed with silver rings” Joseph. Hadfield 1785

Now southern Hair styles are a whole other monster. Bowl cuts with scalplocks,
weird V shaped hair cuts..It’s worth a write up all on its own. So I’ll just focus on some southern
scalplocks and a specific quote that I found really interesting.

“The hair of the head is shaved, Tho’ many of the old people have it
plucked out by the roots, except a patch on the hinder part of the head, about
twice the bigneess of a crown-piece, which is ornamented with beads, feathers,
wampum,stained deers hair, and such like baubles.” Timberlake on the
cherokees
“The Party appeared the next day painted red and black, Their heads covered all over with Swan down, and a tuft of long white feathers fixt to the crown of their heads” Adair

Ok now the context of the “down feathers” quote is for a social gathering but the same
idea does pop up in northern accounts.
For a long time I debated how to do this look then after stepping away
from the search I saw a better version of the Cherokee “commission” image and
the paint in his hair popped out. Add this to the down feathers and wammo it
made sense. Pouchot also describes painting the hairs and once again add the
northern down quotes and you have well….Can you say Yanomamo?

Ok stay with me…The native people of the Amazon still practice wearing greased/painted hair sprinkled with down feathers. I don’t like using modern images But it does giveyou an idea of how to “put on the down”.
Ok so feathers ,tubes ,brooches all seem to be common items shown in the period. I’ve
added a few images in a collage to show various items being sported in the
hair. Also I’ve done an image of some modern reproductions that are an
alternative to a roach. It’s not that roaches weren’t common but I feel that if
Jamie Pennisi hadn’t owned one back in the early 90’s we wouldn’t see so many
at events (i.e. Modern artists pint them a lot so you all wear them a lot)
Some
other things you might try and rethink/think about:
Turkey Bush roaches- Ok a few feathers is one thing but a
giant flock of turkey feathers on your head is another.
Hackle roaches- Ok the Death of wolfe native is kewl looking
but there is no original feather roach with a modern roach base. Try tying some
feathers to a brooch or a tube. You get the same look using all period
alternatives.
Try dying your feathers- Period references mention dyed
feathers why not try and natural dye some swan/small turkey/fake eagle
feathers.
Brooches-plenty of accounts of them plaited into hair
Hair garters- come on dare to be common
Context- Are you at a Johnson hall? Treaty of Easton? Or are
you hanging out at Pluggy’s town or hunting? Chances are you’re going to sport
different stuff in your hair for different occasions. Sometimes less is more.
It’s pretty hard to lay down for a nap when you have a turkey pompadour.
Wear Nothing- Go crazy be that guy with just a scalplock.
Might not look like the guy on the cover of muzzleloader but you’ll look like
the guy in a bunch of period images.

Well I’ve rambled on enough on the subject.. I should be weaving or sewing anyhow. Have you signed up for the EWIC yet? If you make it and ask nicely you can probably
get Jamie Pennisi to do his greatest poses from the covers of Muzzleloader for
you. He loves it when you ask him to do that.

On a crass commercialism note AT the Eastern Door now has a source for small Glass
bottles like I’ve mentioned here a few times. I’m not sure of the prices but
they are the perfect size for paint (hair) oil. Drop him an email for details.
Posted by Nathan Kobuck at 9:51 AM