John Buxton hates hats....unless they have a Steelers logo 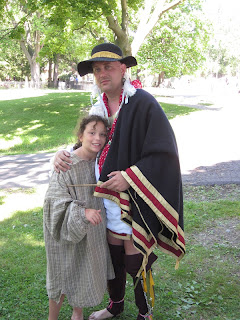 My daughter Riley and I at Niagara...Sporting my plain boring hat...that was awesome to have in the treeless fort 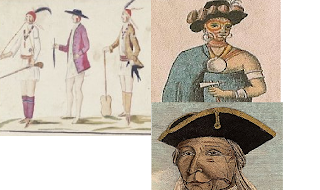 The weather has settled into a steady rain/shine mix as of late. I spent a few hours yesterday shooting my blue gun and walking thru the woods looking for antler sheds (found nothing).
The chewed ball method is still holding up. Shooting at 50 yards off hand I’m
doing really well at keeping a pattern in the center of the target (diner plate
sized target with a 6 by 6 square in the center)…30 yards I’m destroying it. I’m
shooting .58 chewed ball unwadded/unpatched with 70 grains of 3 f. I got a
little cocky and started practicing running and loading from a slit pouch. Not
doing too bad but that’s a whole other post in itself. I still like my otter
pouch better…
So far I’ve covered head scarves, scalplocks and stuff for your scalplocks. Man who would have thought sharing info would stir up such a hornets nest (complete with skin color charts….really?).My intention for this post was to cover more headgear for the Native side of
the hobbie but putting this together I was dumbstruck by the amount of info out there on natives wearing hats, caps,hoods and diadems.
As result I’ve decided to focus on the standard hat. At some point in the near future I plan on revisiting the other parts of head gear (or do the right thing and just write it up as an article….I can hear Henri cursing my name in the distance, I don’t speak French but it sounds bad)

You know the regular, normal, made en masse by professionals, boring hat. I covered this
topic a little in a previous posting when I got bored and decided to try my
hand at a “peachey” of a hat. I never did get to sport the hat I loaned it John
Buxton to use (but its still not in a painting hint hint Mr. B next time you
think of painting a roach how about a hat on the guy…I’m getting a phone call
for that one)

Hats can get caught up in a lot of symbolism in the period. As a result a lot of the
focus on natives wearing hats has been on their presentation to headmen (along
with the fancy coat/waist coat) What this misses however is the plain simple
fact in the 18th century hats were EVERYWHERE. In American culture a
hat was part of a mans standard clothing (working class to the president) until
Kennedy (I have theories why he didn’t wear one…)

SO it’s no coincidence that natives in a hat filled world would pick on their use (usefullness) pretty quickly. also despite popular culture telling us differently native peoples are not morons and had by the time we showed up realized the fact keeping snow/sun/rain off their head and out of their eyes was helpful intraveling in the elements….without help from aliens.

Here are a number of refrences to the use of hats by natives in the 18th
century. This is only scratching the surface of refrences:
“A great number of the natives, i.e. the confederates of the
French had already begun to dress like the French: the same kind of jacket and
vest, while on journeys they wore the they wore the same red cap or hat” Peter
Kalm 1750
“The goods for Indian trade are….hats trimmed in fine and
imitation, with variegated plumes in red, yellow, blue and green” Pouchot 1750’s
“One of our Indians was in the woods a small distance from
Bethlehem, with his gun, hopeing to meet with a deer, on his return home he met
with two men, who (as he informs) he saluted by takeing off his hat; he had not
gone far before he heard a gun fired, and the bullet whistled near by him,
which terrified him very much, and running thro’ the thick bushes his gun lock
catched fast, and went off, he dropt it, his hat, blanket,&c., and came
home much frighted” Page 67 Pa Archives
“In one of our walks meeting an Indian dressed in a
remarkable plain manner with a broad flat hat, like a Qr (quaker), we askt him
if he was a Qr, & he smiling, answered yes, Yes, I a quaker now-but when I
go away I-Indian again” Pa arcives 276
Statement of William Peters and Jacob Duche 1757
“Thursday the white mingo went with us to the place he said
he was fired at and shewed us the place where he stood and that the man who
fired at him that I saw the steps of the
white mingo and as I undertood capn. Wood saw the prints of the to men that we
found the matchcoat and hat he dropped and returnd them to him” Lewis
Morris Pittsburgh 16, 1775
“In the year 1762 I witnessed a remarkable instance in the
disposition of Indians to indulge their wives… set off on horseback for that
place, one hundred miles distant, and returned with as much corn as filled the
crown of his hat, for which he gave his horse in exchange, and came home on foot,
bringing his saddle back with him.” Heckwleder

I hope
this helps folks out there who are looking for something “native” to cover
their head with to really rethink just what’s “native”. No need for a lot of
ornaments, put out a lot of $ or time for a piece that you’ll find out in a few
weeks/months just wasn’t right (thinking about all the turkey bush headdresses
out there…are they really practical?)
If you feel the need to decorate it please keep it simple.
Some silk ribbon/gartering a feather or two or maybe nothing. BTW Mike Galban already called dibs on the
finger woven hat band.
Also for
anyone still interested in the EWIC
please contact the Fort Pitt Museum for info directly. The poster I had
posted turns out to be incorrect. I had thought it was put out by the site but
it seems that it was made by someone not affiliated with Fort Pitt. You can
find the info here: http://www.heinzhistorycenter.org/secondary.aspx?id=296
Well back to weaving. Hmm I need to get back to anglo stuff
on here.
Posted by Nathan Kobuck at 12:08 PM