Some tips for sewing up matchcoats...on a 100 degree day

Some Period images of matchcoats....JB must of kept ppl sewing for years 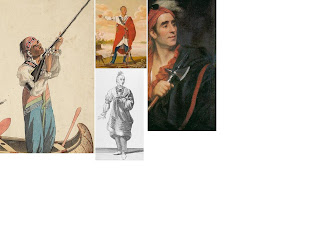 I bet the guy in the canoe is shooting a chewed bullet..... 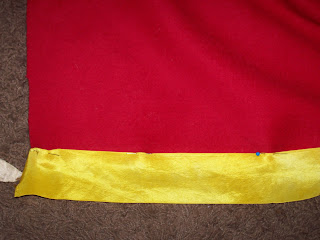 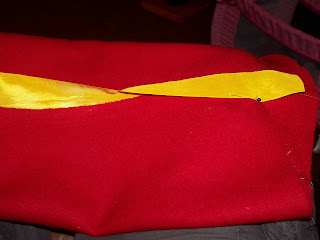 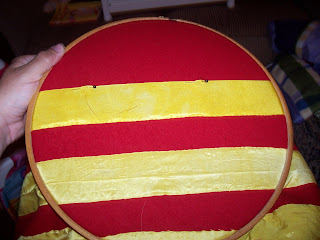 Use of embroidery hoop

“ The women wear an under petticoat called a machicote made of an ell of blue or red cloth….the lower edge is ornamented with several strips of yellow, blue and red ribbon or English edging lace.” Pouchot

One project (or should I say projects) I’ve been cranking on as of late is matchcoats /leggings/ breechclouts with ribbon work. For some reason this has been a nice way to chill out in the evening as opposed to weaving. SO my evenings have been full of ribbon work and zombie movies (I got issues).
I’ve had a number of questions from folks on how I sew up matchcoats so I figured I’d keep the blog post ball rolling by doing a how to on matchcoats. A matchcoat is simply a small wrap blanket. (matchcoat + Capote = 18th century snuggie yeah that could get weird) From most accounts the standard men’s matchcoat measurements run about 60 wide by 60-72 long.
Matchcoats for us as reeanctors have become a kind of catchall expression for any decorated wrap blanket. Looking at period images/accounts you can see them listed as “matchcoats”, “strouds”, “cloaks” etc. SO for the purpose of this blog a matchcoat is any piece of wool smaller then a 3 point blanket. The colors of wool I have found listed are blue, Red, black, purple, WHITE (a lot of white) green and 1 mention of brown (odd to base a whole industry on one brown matchcoat)

Also a matchcoat does not mean the item HAS to be decorated with Ribbon. Pouchot mentions natives simply using White blankets and painting a red cross on them. Think about it plain white wool and some paint might cost ya around $40 ($106 if ya use Kochan wool but that would be a sweet white matchcoat)

I’d also like to clarify something here Stroud does not just mean a saved list cloth. Stroud was produced with a saved list as well as WITHOUT. That means just a solid color of wool. Some stroud merchants have done as much as possible to muddy the dye soaked waters on this subject. So keep that in mind when looking for a source of wool for a matchcoat.

These purchases are very similar to other men in his crew as well. Now here is the rub….I’m not totally convinced he and the other men are using the matchcoats as..well matchcoats. The material involved and the $ to the tailor to me points out that these may be sewn into blanket coats. The BW&M papers mention a few times the fact that damaged stroud matchcoats be turned into blanket coats and the $ for sewing up a blanket coat is along the same lines that the company taylors made for sewing blanket coats. To Paraphrase my friend Wil Gore here “they could visualize sleeves”. Also on the same side of the coin one should remember that in his oft cited description of backcountry dress Doddridge mentions that matchcoats were not popular among the young men. Just something to think about….

However I am not saying don’t use a matchcoat if you’re a white guy.(I am saying however think a little more about a blanket coat :P) Hunters do purchase them and for someone acting as a “spy” a matchcoat is a standard piece of gear. From Washington/bouquet dressing .their provincials in blankets and paint to smith’s black boy’s “green “ shrouds.

So here we have a hunter buying 3 matchcoats and enough halfthicks for possibly another. What I find interesting here is the purchase of thread and bed lace. Bed lace is a type of gartering that was often used to decorate matchcoats. Is this a hunter with a fancy matchcoat?
Also one thing I noticed while skimming thru my BW&M stuff as well as Mark Baker’s book getting some stuff to post on this was the actual lack of matchcoats mentioned being purchased by hunters. I had always just assumed all the matchcoats Hollinghead took with him on his grand hunt were meant for his hunters then today I noticed part of his account I had read over a million times
“ For sale to Batteau men & Indians also Sundries for the use of said company”
This along with the fact there are number of ledger accounts of him selling a lot of these goods to natives during his trip kind of makes me go hmmmmmmm?
Here are two Runaway ads I thought were pretty kewl that mention matchcoats. I feel the “strip’d” matchcoat mentioned is probably decorated with ribbon/lace.

May 29, 1752.
RAN away from the Subscriber, in Somerset County, in the Province of Maryland, on the 3d Day of April last, a tall slim Mulattoe Man Slave, aged between 38 and 40 Years; looks much like unto an Indian and will endeavour to pass for such; had with him a strip'd Indian Match-coat, which I suppose he will make Use of for that Purpose; had on a white Cotton Jacket, an old Fearnought ditto, an old yellowish Duroy Coat; he is mark'd under the Wasteband of his Breeches, on the hind Parts, with one or two white Spots, occasioned by a Burn or some other Acident [sic] when he was young: As he cross'd the Bay, I imagine he designs for Carolina. Whoever secures him so that the Owner may have him again, shall have Five Pistoles Reward, if taken on the other Side of Chesapeake-Bay.
Henry Waggaman. N.B. He has work 'd chiefly at the Shipcarpenters Business, and will endeavour to pass for one.

ALEXANDRIA, June 5, 1775. EIGHT POUNDS REWARD. RUN away from the Subscriber, two indented Servants named ROBERT SHAW and ANDREW INGLES, both Natives of Scotland, and Bakers by Trade. Each of them had on a Bearskin Jacket lined with Plaid, Osnabrug Trousers, old Shoes, and Half worn Castor Hats. Their Bundles consist, as it is supposed, of two Match Coat Blankets, two Pair of Leather Breeches, two Osnabrug Shirts, two Check Shirts, and two red Jackets. Shaw is about 5 Feet 1 0 Inches high, has a swarthy Complexion, dark short frizled Hair, a long Scar in his right Arm, appears bold, and talks much. Ingles is about 5 Feet 5 Inches high, has short straight Hair, swarthy and long featured, has a Scab over his right Eye, his right Leg is sore, he is fond of Liquor, and talks more in his Country Dialect than Shaw.----THOMAS WALSOM, a Convict, about 27 Years of Age, a Barber by Trade, about 5 Feet 6 Inches high, has a Laddish down Look, brown straight Hair, a little knock-kneed, and a leering Look; had on, and took with him, two white Linen Shirts, an old Drab coloured Cloth Coat, one red and one striped Holland Jacket, one Pair of new Drilling Breeches, one Pair of old Buff coloured Stocking Breeches, one Pair of white and one Pair of white and blue spotted Stockings, a new Felt Hat bound with black Ferreting, has a black Silk Handkerchief, and some other Things which cannot be described.----WILLIAM LEE, by Trade a Cooper, about 5 Feet 9 Inches high, marked with the Smallpox, has a remarkable large Nose, speaks thick, and is impudent; he took with him a yellow Bull-Dog, with cropped Ears, one Side of his Face white, has a Glass Eye, and white Breast and Neck, is very fond of going into the Water, and answers to the Name of Turk. The said Lee had a Variety of Clothes, which cannot well be described. Whoever takes up, and secures the said Servants, shall have the above Reward, or 40 s. for each, paid by
JAMES KIRK.
ROBERT ADAM.

So ya want to wear a decorated matchcoat? Ok I knew it ribbon will beat out painted crosses every time. Ok so your going to need:
silk ribbon (a lot of silk ribbon)
silk thread
60 by 60/72 piece of wool
Pins/needles (you know sewing stuff)
An embroidery hoop
A room free of dogs/children/cats/goats with Good light
If your sewing it this week a room with AC….spending all day sewing with a blanket drapped on you in this heat is a great way to drop pounds…

To start I draw out a basic idea of the matcoat I want to sew based on a period image/example. Have the image next to your work area (I’ve had two examples I started sewing recently messed up because I forgot to do this).
Decide on what you want to be the front of your matchcoat. Along the bottom of the backside pin your silk ribbon down so only about ¼ inch is on the wool. Now sew this down using either a prick stitch or running stitch.
When you’re finished with this row turn the ribbon over the raw edge and pin on the other side. Now simply pin the matchcoat to your leg and this will allow you to use both hands to keep your ribbon tight as you sew. Or you can use an embroidery hoop. I’ve found when doing smaller number of ribbon this is a great way to keep everything tight and in order. It’s also easier to join ribbons at right angles such as at the corners.
Now simply (using either method secure the ribbon and keep on stitching.
**tip**When cutting the thread your going to sew with a way to make it easier is a trick I picked up from Travis Crowder is to hold the spool in the center of your chest and using your other hand pull out 1 arms length of thread. Sounds simple but I have seen ppl (myself included) trying to use the entire ribbons length of thread and it gets tangled up pretty quickly. This way your only using as much as you can pull tight.

I dont really know what else I can say in a how to like this. One detail you might want to think about adding in is the “dangle” ribbon. If you look at the images I’ve posted you can see on a few examples there is a little bit of ribbon left to hang down on the edges or where the rows of ribbon stop at roughly the center point. The messiter example has this feature as does the example in the Peter the great museum.
I use pretty much the same technique when doing wrap skirts, leggings, breechclouts or hoods. Just find a period image you like and start sewing. Or go really crazy and just get a white matchcoat and paint a red cross on it. Or go extra crazy and turn that stroud into a blanket coat or a Sky Blue Cappa coat (Galban and Hersee called dibs)

Back to the grindstone…..I got lotsa weaving to do.anyone in the market for a matchcoat? Or green leggings?
Posted by Nathan Kobuck at 8:23 PM