did they dye easter eggs with walnuts or indigo? do you care? 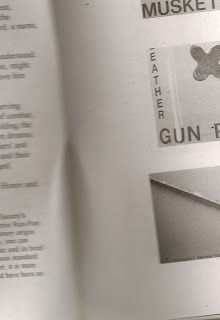 "X" patch made of leather 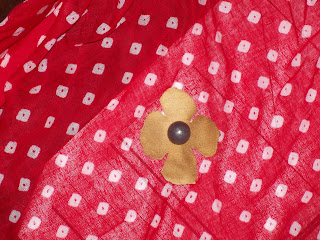 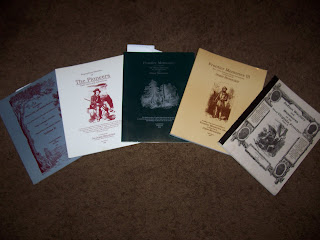 Some of Mr. Payne's books...I'd have more but I lent them out 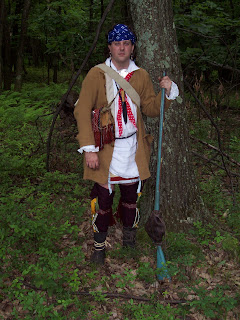 MY new ohio country "native hunter" kit....yeah there are native longhunters and french longhunters in the records....I gotta get my new fort clothes dirty

I’ve been keeping up on my shooting a few times a week and I gotta say I’m loving the blue gun. I’ve been shooting it with an un patched 60 cal ball on top of 60 grains and I’ve been hitting at 50-75 yards 9 out of 10 times. While going thru some of my grandfathers muzzleloader stuff I came across a lot of .50 round ball and for some reason I started thinking about an image I had posted on FF awhile ago.
At the Fort Freeland site there were a number of leather patches shaped like x’s. The idea was to be able to shoot an undersized ball in your gun. SO I figured I’d give it a go. I cut 10 patches out of some brain tan I had and just to give it a shot 10 patches out of some wool scraps I had laying around. I was pretty happy with the results. I figured this was a siege “fix” for someone in a blockhouse/fort trying to simply take a shot at an attacker. SO I used a “torso” sized target since the idea was to only see if I could hit someone with this type of load.
I set the target at 75 yards and fired a few shots with an unpatched .50 ball. Well I’m not ashamed to admit I didn’t hit the thing once. So I swabbed the barrel and tried using the leather patches. I was surprised at how easily the round went down the barrel (no grease just spit). I was also surprised to see that out of the 10 shots with this set up 6 shots placed in the “vitals” section of the torso and the rest placed in areas that well….I wouldn’t want to get shot.
The problem for me was that I couldn’t keep a consistent grouping with this load. Also I wouldn’t want to hunt with it as like most hunters I don’t like wounding animals. However in a blockhouse shooting at attackers this would really help solve a lack of ammo problem.
Speaking of consistent….One item I have consistently pushed since seeing it/them for the first time is the books of Dale Payne. Dale is a former police officer and he has compiled a number of books on the 18th century backcountry using 19th century interviews/period journals and the draper manuscripts. His books in my opinion are required reading for anyone that is interested in the backcountry. Longhunter, Native, French Canadian (they are in there a little) are all mentioned in these books. I was able to do a brief interview with Dale, this is the boring stuff after we talked about f troop and the Davey crocket films….
SO how long have you been involved with Living history? What got you started?
I have always been an avid student of 18th century history, ever since I was a child. I guess the Davy Crockett rage in the 50's contributed to it.

What got you interested in the Draper stuff?
As far as I am concerned the Draper manuscripts are the bible for 18th century re-enacters. It holds such a vast amount of information. It would take a lifetime to view it all. However some of the information should be viewed with caution. I think first hand accounts are the best you can get when looking for information as to what life was really like.

Has any info you’ve dug up changed a previous idea you had about the 18th century backcountry?
It has given me a better understanding of what 18th century life was really like.

Have you found anything in an interview odder then the “easter egg” refrence?
There has been lots of unusual and out of the ordinary things discovered while doing research. This was definently one of them. At the time I was amazed that they would be using eggs and calling them Easter eggs and leaving the eggg shells along the road. I have since discovered they had been doing this for centuries in the celebration of Easter.

Which interview is your favorite?
It would be really hard to pick a favorite, there are so many of them that gives us so much insight into the daily life during that time period. The interviews of the Clinkenbeards, Benj. Allen and Josiah Collins rank at the top

From looking at the interviews what do you think is missing from most folks kits/portrayals?
I really hate to go an event and see folks walking around in clothes they are afraid to get dirty, especilly women. I don't think they have a clue as to what life was like back then. Perhaps if they were portraying some person in Williamsburg it may be okay. I think on the frontier they were a pretty grubby looking bunch of people.


You can find Dale’s book at smoke and fire, wennawood, Longhunter leather (not 100% but pretty sure Bob carries them) They run between $15 and $20 and are well worth the money. Come on folks youll drop a lot of coin on quillwork why not point some of that towards books? If you had to pick between some of my weaving and Dale’s books…buy his books. My weaving rocks but his books educate you.
SO that’s it for today….my family has left for a week leaving me to run amuck in my files as well as the woods of central Pa. Maybe later today I’ll do the unthinkable and post 2 things in a day. Oh well I need to make an ammo run as I’m heading to the woods with a few friends this weekend. On deck is some matchcoat info and native hair stuff…plus a total kit documentation break down…