Rumors of my Demise... 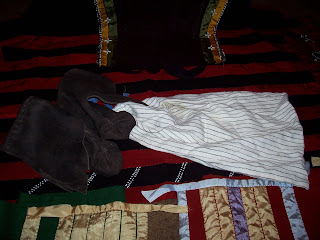 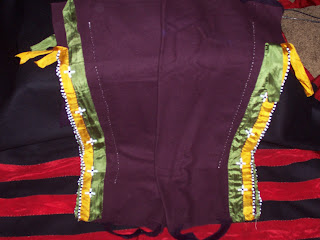 Finished "mckee" leggings...beading is based off 18th cent image of leggings in french collection 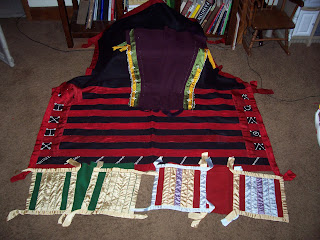 
Yeah..so..I’m back. The last few months have been pretty….lets say hectic. Some health issues sidelined my from the blog but I’ve been staying just as busy with weaving, hunting, shooting and reading. In fact the break gave me a lot of time to dive back into the books. So right now I’m tweaking m kit out a little more for a scout I’m heading on next week. I’m using this scout to break in some new pieces of gear as well as well as get some pics of my gear in use (why is it you never take pix of stuff when your doing it?)
So I’ve been trying to refine my native “pack” based on period descriptions. I’ve been gathering info on this for a few years as well as trying out different techniques. The standard base of the pack is the simple tumpline/blanket roll. The container for the items in the pack is a small striped bag I made from a torn petticoat. This is referenced in the interviews Jeptha Simms did with folks from new York after the Revolutionary war. Alan Gutchess first turned me onto simms books a few years ago and they are a kind of “shane” interviews for Northern folks.
In one of Simms interviews it’s states that natives made packs from striped Petticoats they took from settlers on raids. Since I portray someone who was a captive or operates with natives (rev war ID/trader) I figured this would be a good item for me to test out. The pack I’m using is 14 by 24 and is tied with a piece of blue linen tape from the petticoat.
The items I’ll be carrying in the pack are pretty simple. A small bark container for tinder, spoon, pewter porringer, husk salt bottle, whetstone, moc repair /making kit as well as the usual “pocket trash”. The scenario I’ve set for myself is pretty simple…just being in the field. I’m doing some work on my lean to as well as some work around the camp to help set it up for my tactical in august (i.e clearly mark the camp borders so Capt. Bull’s guys don’t end up in the next county)
Some of the other gear I’ve been working on is my “mckee” leggings which got me on a ribbon sewing fit (anyone need a matchcoat? Or clout?) I’ve also finaly made myself a pair of high top Doddridge mocs. Doddridge mentions that : Flaps were left on each side to reach some distance up the legs.
So while working on some mocs for customers and my step daughter I knocked myself out a pair from some black tanned deerskin . For a GREAT how to on moc making check out Ike Walter’s blog, he did a bang up how to on making puckered mocs.
http://frenchinwisconsin.yolasite.com/my-blog/makazinan-moccasins

Some quotes on stuff in “native packs” to show what I’m basing my gear on.

reccolections of 60 years...
The knapsack is an old blanket, and contains some parched corn, flour, jerked meat, and leather to patch their moccasins with.

Letters from fort pitt:
Journal of J Ecuyer
July 25th 1763 four Indians passing up the mon. close by the opposite shore,
contrary to orders, a six pounder with grape was fired on them…they left
four rifles, with eight pairs of new Indian shoes, al their powder horns and
pouches full of powder and ball, and two pairs of leggings for each, with
five blankets a sure sign they were going to war.
Heckwelder pack quote
A blanket, dressed deer skin for Mocksens, a few articles of kitchen furniture as a kettle, bowl or dish with some spoons and some bread, corn, salt,

Don’t forget a dead goose in your pack:
At an interview with Jacob Enders, previously mentioned, he related the following incident: After the enemy began to move down the valley, he left the fort to hang upon his rear. Discovering an Indian, he followed him along the creek toward the river, until he got a shot at him. He had on a large pack, and over one shoulder hung a goose, he had recently killed. When Enders fired, the Indian fell upon his knees, and dropped his pack and goose ; then springing upon his feet, he set off on a moderate trot toward the river. Enders pursued until the Indian turned and raised his rifle on him, when he halted to load, and the Indian, without firing, again ran off. After pursuing until he was exposed to the fire of others of the enemy, Enders gave over the chase. On arriving where he had left the pack and goose, he found that John Rickard, a fellow soldier, who had seen the spoils abandoned from his position in the block-house, had been there and taken them to the fort. Enders claimed them, but Rickard would not give them up, or any part of them. The pack contained eight pairs of new mocasins.


So just in these few refrences you can see how simple these guys traveled as well as the number one Item needed to travel was….Moccasins (go figure). Well I should get back to sewing/weaving Now that my little break is over I should be posting a lot more esp. in the next few days. I’ve had a chance to get some more images of original common native items as well as a quasi interview with Dale Payne (did you read his books yet? I gave you some time….there will be a test) as well as stuff on shoe packs…shot pouches…native hair stuff just because I wasn’t on the net doesn’t mean I was doing research lol.