rained all day stayed in camp.... 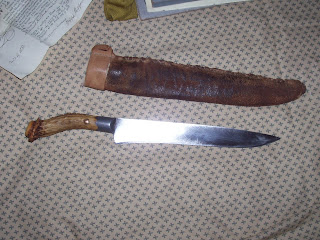 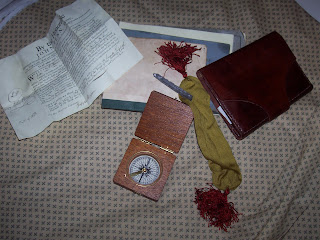 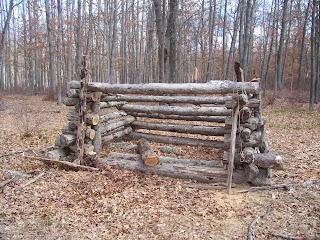 First stage of my half faced camp....

So spring is here…I love spring. The actual reason I love spring is the grayness and constant rain. Wow I guess my blackness is pretty obvious in this picture. If you look at period narratives this is also one of the times of year you see my favorite period quotes “rained all day stayed in camp”. To me this is the idea we should really focus on. Any hunter knows the majority of the time you hunt you’re simply watching around you and a big part of that is based on the weather. I think the “long” hunter idea is based just as much on the amount of time you spent in the woods as much as how far you rode to hunt.
The idea of hunting is romantic but the idea of hanging out at the camp near the bateau isn’t. This was the place ypu find people fleshing hides, dressing them for mocs, pressing hides into bales. All the things that would have been your usual day.
Another aspect of your social day would have been gambling. Betting on who could flesh the most hides, dog fights, fist fights, cards and shooting matches. This was all part of your normal worldview. So one thing I have been trying to get into my skull has been the rules to the card game whist. Gerry Barker first turned me onto this game a number of years ago and the social aspects of gaming in the period (check out Gerry’s articles in muzzleloader and his small book on spies…..I’ve known Gerry for years now and he is a great source of information and an awesome guy) Whist was a common Card game and one the majority of us would have known. So here is a link to site that can help you learn this game as well as sources for period cards.
http://www.pagat.com/whist/whist.html

period cards (as well as nice nice tools and other items)
http://www.avalonforge.com/


Part of staying in camp is also…well having a camp. A few years ago The folks from the ACM spent a few days working on a cabin crib at my hunting camp. The idea was to build a “hogpen” cabin to hang out in. I have to admit I was against the idea of the cabin from the get go. All I simply wanted was a substantial half faced shelter. Sorry but I try to be nothing more than the idle hunter. I hate farm work, I have no trade but I can hunt. So after doing some work off and on I decided to simply turn the crib into a half faced shelter. So over the past few weeks I notched out logs (yes Chris it will stay up and the logs are notched) used a buck saw to cut out an opening (not gonna lie I also brought out a chainsaw for some tweaking)
So I’m now at the point I need to gather some bark to cover it while I get all the stuff together to rive out some clapboards to cover it. I plan on finishing it with a bench/bunk inside as well as a table. I’ve already made a fleshing beam and a small shelter to smoke hind quarters in. I’ll post pics aas I progress on the project. The other “rainy day” projects I’ve started has been gathering some “burl” to make myself a “canoe cup”. I figured with friends like Mike Galban and Ward Oles who really have nailed down burl work I should pick their brains to try and make myself a backcountry cup as nicely as possible.
SO as not to make this a simple “I did this” blog I’d post some info on a piece of gear I carry. A year ago I picked up a nice Repro compass from Jim Mullins. Since the purpose of this blog is to document all the gear I carry I figured this would be a perfect time to..well get back on track.
Below are 2 “hunters” working for BW&M in the late 1760’s. Both men pick up pocket compasses. I find it really interesting that they buy them so close together. I wonder if a hunting partner came in with a story of being lost. I also find it interesting that Dunnan buys 2 butcher knives at once. Anyone who has skinned out a number of deer at once knows how nice it is to have a back up knife. SO I can imagine guys hunting deer and Buffalo would find this just as useful.

To throw a little gas on the proverbial fire to me this is also a point for the non giant file knife crowd. If your job is skinning animals wouldn’t you go for the right tool for the job? I still need to find a way to skin a buffalo with a thin blade trade knife and a large file knife….god do I have weird daydreams.

Here is a 1770’s Virginia runaway carrying a compass with well a pretty nice sounding kit to head west:
FINCASTLE, May 21, 1775. RUN away from the subscriber, living on Neck creek, near Mr.Thopson's mill, an Irish servant man named THOMAS BENSON, about 5 feet 9 inches high, wears his own long black hair tied, and has lost the half of his left hand little finger; had on a home made flax linen shirt, a pair of tow linen trousers, and carried with him a blue home made cloth coat, a red and yellow silk and cotton waistcoat, buckskin breeches, a rackoon hat, a brass mounted long smooth-bore gun, marked on the side-plate MM 1769, and on the barrel W. MORGAN, a shot-bag and powder-horn, a canister with 2 lbs. of powder, a falling axe, a pocket compass, &c. &c. He likewise stole his indentures, and, being a very good scholar, it is probable he may make an assignment on them. He is supposed to be with Samuel Ingram's servant man, as they both went off about the same time. Whoever secures the said servant, so that I get him again, shall have 5 l. reward, and, if out of the county, reasonable charges, paid by
NATHANIEL MORGAN.

I’d love to know what that “rackoon” hat looked like. Also Pay attention to the use of breeches and trousers together. Trousers are the 18th century coveralls guys and honestly they are way nicer to wear in the summer then leggings (and documented all over the backcountry).

Well I should be weaving and sewing for the long hunter school next weekend. It looks like the Traders crew will have a nice showing and I’m looking forward to seeing a few of the guys from the 2nd Company . What happens when brown and stroud hang out? Bad things man ,bad things. Or..horror...We'll all get along and talk history from different points of view.
Posted by Nathan Kobuck at 12:05 PM