Happy holidays and Pa Hunters or "We're all misfits!" 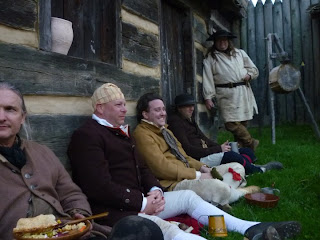 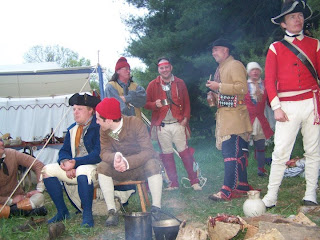 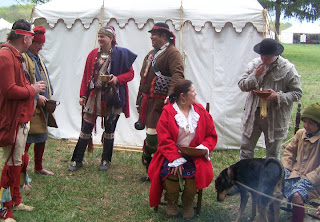 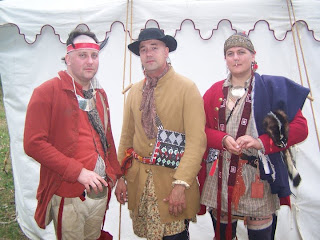 Me, Ward and Jason....three Bad ideas come to life

So it’s the holidays…..time for reindeer games , rein deer games men…Falala (that’s for you Crowder). I’d like to wish a happy holiday season to all of you. Especially to the Folks I run with …happy holidays/midwinter to the Galbans, Eli, Ward, Burke, crowder , Stout, duane, Jamie ,Krause, The Gore’s , Mark / Ehrin/Steve (bless your hearts) ,Neal ,Ike , Jesse/Suze , Jason/Katy and the rest of the Island of Misfit toys. You guys rock and my family thanx you all for keeping me in check. (who ever heard of a gutchess/Stephenson/Guthrie in a box?)

Funny Part for me is If I ever got all those folks in one place at a time…well the 18th century as you know it would change lol. I’m one lucky Mf’er to have the friends I do and I know it. I feel really Lucky to have the friends I do and I know Natalie and girls Thank heaven everyday for you folks. I guess I’m tough to live with (who knew). SO thanx gang and happy holidays.
So my blog was all set to go when Bam it was messed up by a virus. SO this blog is gonna be a little held back but in the spirit of the season…hunting I figured I’d Post an account Stephenson dug up and Steve Rayner dug up on Pa hunters.

Thanx Scott:
The Pennsylvania Gazette March 10, 1757
Some time ago, in Hunting Time, a Man in Frederick County, (MD.)
having made himself a Jacket of the Skin of a Deer, with the
Hair and Tail on, went out to hunt for Deer, and as he was
creeping thro Bushes in pursuit of Prey, was seen by another
Hunter, who taking him for a Deer, fired at him, and shot
thro'the Skin, but happily did not kill. (It is not
improbable but he might wear the Horns as well as the Tail).

And yes I’m now working on a deer skin jacket for next year….The following from the "Life of Timothy Pickering" Vol. 2, though brief, are some of the most abundant and detailed camp food notes I've ever seen. I was looking for evidence of improvised "coffee" at the time.

Pickering was kidnapped during the political unrest over the Constitution in July 1788 and taken to the far reaches of the Wyoming Valley. He was held hostage for the release of a Colonel Franklin.

From a narrative of the events written in 1818:

"[Unspecified date.] The leader of this band was a hunter, and had his rifle-gun with him. As we proceeded a fawn was started, and as he bounded along the hunter shot him, and in five minutes had his skin off and the carcase slung at his back. At the distance of three or four miles from the river, they halted close by a very small run of water. A fire being quickly kindled, they began to cook some of the venison. The hunter took the first cut. They sharpened small sticks, at both ends, running one into a slice of the fawn and setting the other end into the ground, the top of the stick bearing so near the fire as to broil the flesh. Being hungry, I borrowed one of their knives and followed their example. I observed the hunter tending his steak with great nicety, and sprinkling it with a little sauce. As soon as it was done he, with a very good grace, presented it to me.

Before night they cut down some limbs of trees and formed a slight booth, to shelter us from the dew. One of them taking post as a sentinel, we lay down on the ground; my pillow was a stone. In this station we remained about a week. At first they had some good salt pork and wheaten bread, that lasted two or three days, after which they got Indian meal, which they made into cakes, or fried as pancakes, in the fat of the pork. Of the pork they were very sparing, frying only two or three small slices at a time, and cutting them up in the pan. Such was our breakfast, dinner, and supper. My share did not exceed five mouthfuls of pork at each meal.* They fared better, sopping up with their bread or cakes, all the fat in the pan, of which I felt no inclination to partake." p. 384-85.

Ca. July 16.
"I lay down with my guard that night, not doubting of my speedy release. As soon as it was light I rose, put the firebrands together (in the woods a fire is generally kept up at night, even in the warmest weather), mixed up some of their miserable coarse Indian-meal for cakes, spread the dough on pieces of hemlock bark (the usual trenchers), and set them to the fire. As soon as it was light enough to see our green tea, I went to gather it. This was the winter green, bearing red berries, which went by the name of partridge berries. Infused in boiling water the winter green makes a tolerable warm beverage.*

By the time my guard were awake, the tea was boiled and the cakes were baked. I told them that, expecting to be released, I had risen and got the breakfast ready, in order to gain time; for if released, I had a particular desire to reach home the next day. I then proposed that we should go to their head-quarters, without delay; where, if released, it would be well; if not, I would come back with them again into the woods. They readily assented, — took up their kettle and frying-pan (our kitchen furniture), — and down we marched." p. 387-88.

Footnote to July 16.
* "They once asked me if I should like a dish of coffee. 'A dish of coffee by all means,' I answered. They went to work. Boiling water in their iron pot, to make it clean, then emptying it, they set it over the fire to heat. They next strewed into it some Indian-meal ; and when this was roasted, they poured in water ; and as soon as it boiled, the coffee was made. It was an agreeable change for our green tea." p. 388.

[Mentions going nineteen days without a shave or change of clothes and being given a razor, clean stockings and a shirt.]

Letter written while hostage:
"July 3d, 1788.
My Dear Beckey...
The following articles I wish to have sent me, as early as may be, viz.: My old camlet cloak, two pairs of my strongest worsted stockings, one shirt, one coarse pocket-handkerchief, one coarse towel, half a pound of soap, half a quire of paper, two quills, my penknife, my leathern gloves, needle, thread, and worsted yarn (the thread to darn my fustian trowsers), one pound of chocolate and one pound of sugar. To these add Dr. Price's sermons, which I was lately reading to you and Betsey. All these may be put into a strong bag, which will make a pack convenient to carry at the back ; and to sling it, send me four yards of the strong yellow binding. I forgot shoes. Send my strongest pair. Send also a smalltoothed comb." p. 392.

From a journal of his captivity, copied by his son Octavius:
[Citing manuscripts, Vol. lviii, No. 45.]

"Thursday, July 10th... T. Kilborn showed me the twig of a tree, whose bark is a very agreeable bitter. He says there are many large trees of it on the flat by his father's, and that they have used it in timber for part of Sill's house-frame, — a soft wood : it is called winter bark. No meat ; but butter to eat with bread; ginseng at our encampment, in the deep shades of hemlock woods." p. 400.

"Friday, July 11th, fair. Moved our camp about four miles from the river, west of Kilborn's, and about a mile over Mehoopenny Creek. Pork to-day, and what the guard call coffee, — -i.e.,- a crust of wheat-bread toasted very brown, not burnt, and then boiled in water, which is then sweetened. 'Tis very tolerable drink." p. 400.

Steve Nailed this shit…….There is more info in this little section then in some issues of reenacting magazines or whole months of msg boards.Unless you “f*ckin hate reading” this is the research you can use. It always amazes me the number of people who portray hunters that have never even killed a deer. Hell I know some golems who have yet to prove to anyone that have killed a mouse let alone a deer…but hey I guess you don’t need to really kill a deer with a muzzleblast to show how much info you stole in a magazine named after the same. But hey what do I know I’m trapped on the island of misfit toys with friends that really matter….”Who ever heard of a Golem finding research?”…..
Posted by Nathan Kobuck at 1:58 PM