Self promoting collaboration or Really good stuff a few ppl made who will acknowledge the people that helped them...unlike the golem 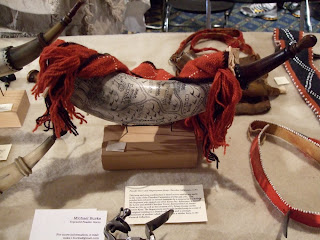 Burke's Cherokee Campaign map horn and Cherokee Strap made by Nathan Kobuck...carving is based of the work of the "master carver" 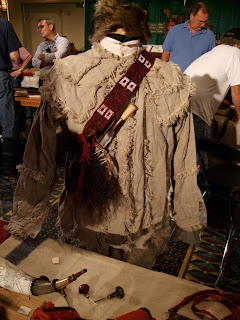 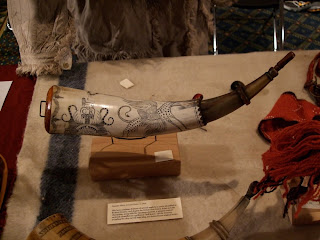 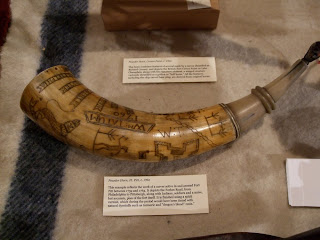 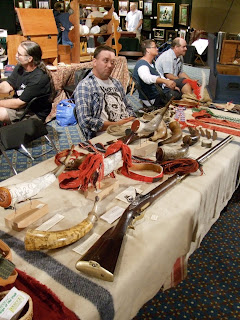 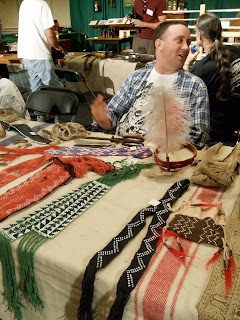 
So after a few weeks I can see that The Treaty Elm table at the CLA show( Mike Burke, Travis Crowder and me Nathan Kobuck…I’m the weak link) wont make it to other blogs because well….We don’t play nice with golems. Ok !OK I guess its partly our fault we didn’t shove our goods in people’s faces and scream “look at me! Look at me!” like other ppl (golems are good at this) but hey we were working on a hangover all weekend and well our stuff is Good enough for us and we’re the toughest critics we know.
Anyhow here are a few pics of the items we had displayed at the show and a sneak peak st items we will have at the Greensburg show in a few weeks. I’m going to go on a limb here and promote the horns done by Mike Burke. Burke and I have been friends since 1999 and roommates off and on since then. I have never seen anyone with an eye for detail on carved horns like this man. Lucky for me and the guys in the Augusta county militia Burke’s horns have gone unnoticed by the masses so the price for us has stayed low but in all honesty this man is an artist that needs to be noticed. I honestly would claim he is the BEST carver out there right now (he’d punch me for that comment) I have owned horns by Larkin, the sibley’s, Cadle and Burkeis still is by far the best out there IMHO.
He can switch up his carving to the region/school and knows the history of the item he’s working. If you are looking for a quality carved powder horn for me Mike Burke is the Guy to go to. Yes I am Bias but its only because I’ve been lucky enough to watch this man in action and know how he does research. …Look for our table at the Greensburg show .
Posted by Nathan Kobuck at 1:26 PM