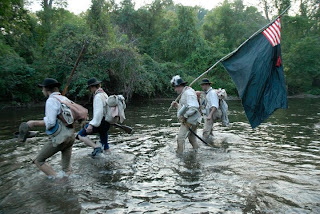 Neal Hurst Made the company flag for the event....You can see my pack worn tumpline fashion 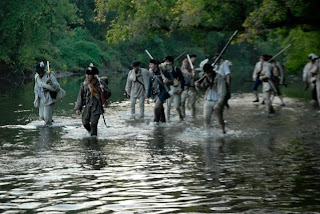 Company at the 1st crossing

Company Pic....2nd Va guys on the end of the line 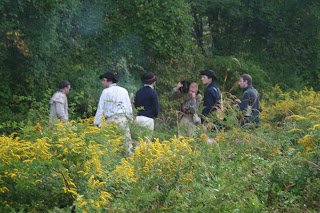 
So last week I didn’t post well anything..sorry my bad. I was trying to finish up some last minute stuff for the Brandywine Reenactment at Brandywine State park in Delaware. Normaly I am really not into the big battle events, I’m not a “powder burner” and most of the time don’t get anything out of this type of event. This year The Augusta County Militia Set up a March in to the event from an offsite location so I couldn’t pass it up.
The overall march for some of us was an 10 mile march ( 5 miles Friday to the ford 5 miles back Saturday) we would cross at two fords and camp at the 2nd ford. This was the location of ford one of the sites guarded by the militia during the Brandywine Campaign . Some of the crew did the march a number of times that weekend so…you go guys!
The gear I carried was a “warner” pack with: A pair of mocs, extra stockings, old tin cartridge box holding my hygiene kit (tooth brush, tooth powder, soap and my modern contact stuff) , fire kit, mallet bottle of whiskey and tumpline. My blanket was tied to the top of the pack. I also carried a tin canteen and haversack with: Pouch of parched corn/jerk/hard bread, Bag with 3 lbs of bacon, salt bottle, bag of potatoes, tin cup, porringer/spoon/fork and cakes of chocolate.
I wore a hunting shirt, shirt, linen waistcoat, trousers stockings, shoes, and cotton cap under a hat. I also wore a belt with a small belt pouch containing my bag of chewing tobacco, pocket knife and fishing kit. The mess equipment that We carried was an axe/sling and a Kettle in a kettle bag. The kettle contained some stag horn sumac berries and a loaf of bread.
My pack/gear seemed to work out pretty well except for the fact my pack had straps that were about 4 inches too short. It was one of those things I knew I should have fixed before the march but..Didn’t. Lucky for me I brought my tumpline because I ended up using it with the pack to carry my gear (point # 156 for tumplines) The other problem I had was the use of my old knit stockings on the 1st days march.
I spent the summer walking in bare feet/mocs both on site and in the woods and never had any problems. Well for the march on day 1 I wore a pair of Paul meekins stockings I bought some time ago and while the construction on them is pretty good I found out a few years ago wet knit stockings will draw file layers off your feet in seconds. Like a moron I wore them and well that coupled with bad shoes turned the little toe on each foot to hamburg (or at least nasty)
Once at the Camp I put my mocs on and feet problems went away right off the bat. AT camp my mess company set up our fire at the end of the line. I was in a mess with : Joesph Privott, Mike Burke, John Reeese, Matt Mickletz and Matt white (now known as the Bacon Boys Mess). We got a fire going gathered wood and proceeded to eat 3lbs of bacon and talk history.
We took up the 2am-4am watch So I ended up acting as a cpl and put guys out on their posts. Burke and Joseph took up the 1st watch so I stayed up gathered more firewood to last us until morning and then had the best time during the whole event. I sat along the Brandywine put my feet in the water with a mallet bottle of whiskey by my side, a chew and fished with a hand line and piece of bacon. I almost landed a fish but during this watch we heard what can only be described as a “manbearpig”. I sent out the next watch and setup the next mess company for watch and fell into a deep coma like sleep.
The march back was pretty uneventful except for the fact I was still dealing with my bonehead move from the day before. The ill fitting shoes and raw toes proved to…well…suck. By the last half mile I was toast. SO I dropped out with another ACM foot causality And we took our time back to the camp. The other fellow was pretty run down from heat so We got him cooled down and some sugar in him and we headed to our camp for some foot first aid.
Once in camp we hung out drank water and I took the time to get two new Period Tattoos from Joespeh Privott. We then marched to the camp kitchen to cook our Pork/corn rations for diner as mess groups. Thanks to Our Camp follower Brooke Armstrong for this she really took the ball and ran with making our meal more than boiled corn and pork. Also the “Yankee” mess did a great job of mixing up some tasty punch while we sat around and waited for diner to cook.
So what did I learn? Well I’ve done a lot of scouts/treks whatever over the past however many years and this march taught me to…..Pay attention! I slacked in my preparation and I paid for it. Also one thing I picked up from those around me….You do not need as much stuff as you think you do. Look more into period journals/accounts on just what these ppl carried. Less is more. Your pack doesn’t need to be full (you have pockets) but overall it was an awesome time And I’d do it again in a second….

For anyone interested in this type of thing the Augusta county Militia is hosting an immersion event the weekend of Nov 6th-8th The main American Impression for the event is that of a Militia company
The website for the event is http://www.welbourne2010.60thrar.org/ This is a great way to get out with some like minded people for a weekend and try your gear out in a tactical/campaign scenario

Also one of my Messmates John Reese is a wealth on info. He has a website at http://www.revwar75.com/ it has a number of articles from Blankets to Mess companies full of period Information. Please check it out
Posted by Nathan Kobuck at 11:44 AM