Hunting from Tree Stands and Mr. Schrecengost gets the Fidgets 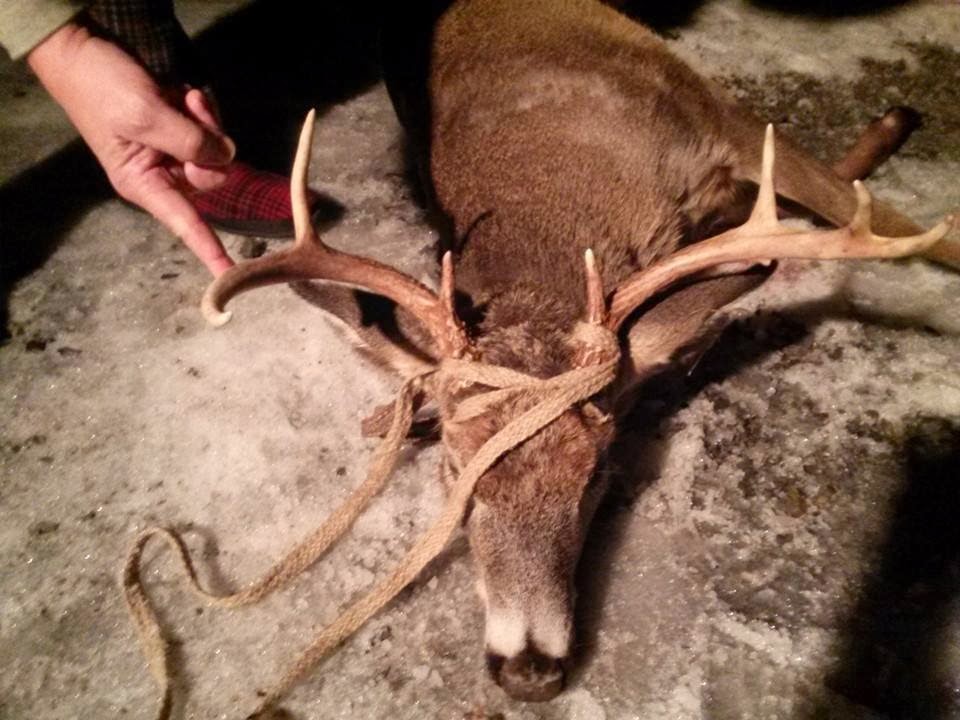 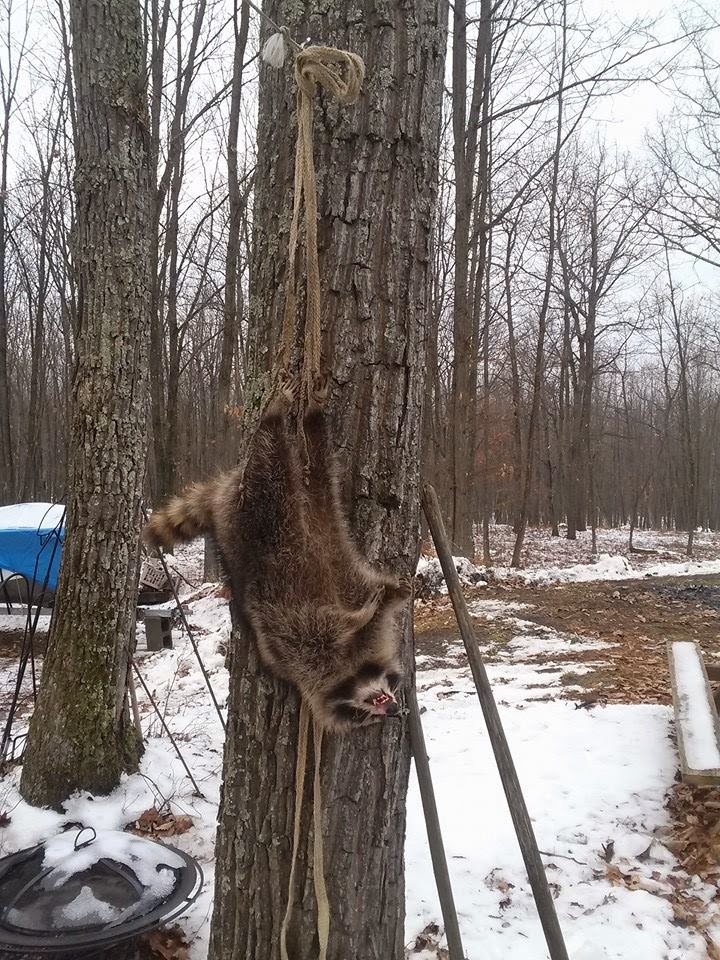 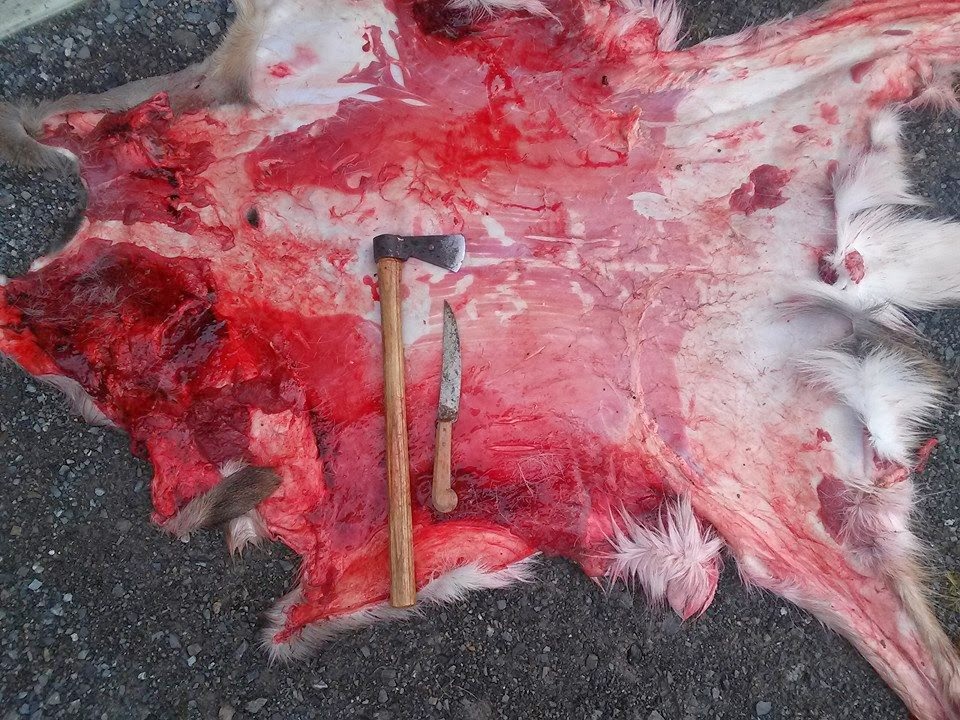 Hawk and  trade Knife by Eric Schatzel used to skin out Buck. I cant say enough about how easy it is to skin things out with a thin bladed well made knife.  Giant knives are for guys who sit in camp and talk about hunting.... trade knives are for the guys who hunt
So it’s been so Cold I had to pull most of my traps and with muskrat season out here In Pennsylvania that means I now have to wait a few days to set some beaver sets. As a result I’ve been going back thru semi finished postings to get back to posting info. What can I say I haven’t been slacking but the ADD has been in full control.


One thing I’ve been really focusing on as of late is rereading hunting narratives to pass the time (still beats msg board debates on ugly coats and how ninjas are the same thing as a native warrior)  While reading narratives of late 18th/early 19th century hunters backed to back a funny detail popped out to me…Tree stands. Ok I’ve read these before but was probably so focused on looking for another detail I passed these up. I’ve often skipped climbing into tree stands in late Muzzleloader season because well…..I was in my gear. Now I think this is a project I’ll jump on next fall. Though I will skip the baiting part of the stand (despite the ugly rumors Mr. Schrecengost spreads about my hunting)

Phillip Tome
If a tree stood within three or four rods of the lick I built my scaffold upon that If there was no tree in a favorable place, I set four crotches in the earth, lay poles across, and make a screen of bushes or bark to conceal myself from the deer. About a month after I had prepared a log, I visited it, and if the deer had found it, I built a scaffold near it. for hunting at these licks, I mounted the scaffold by a ladder which I drew up after me, and patiently awaited the approach of the deer


. If none came during the day, I prepared a torch of pitch pine, sometimes adding lard or bear's grease, which I swung upon a pole reaching from the scaffold to the ground. The torch was attached to a crane of withes and bark, made to slide upon the pole, and slipped down by a cord to within three feet of the ground. As the deer came along, they would stop and stare &t the light, forming an easy mark for me. When alone in these expeditions, I was always provided with two guns, a musket and a rifle.


If several deer came at once within shot, I fired the musket, which was loaded with buckshot, and the deer frequently stood fixed to the spot, not knowing which way to flee, and I could kill three or four before coming down from the scaffold. Besides the light near the ground, I had another upon the scaffold, about as high as my head, and when firing from the scaffold, I raised the gun above the range of the deer, and lower it gradually until the end of the barrel became dark, and then fire, scarcely ever missing my aim. When I fired from the ground by torchlight, I pointed the gun below the game, and raised it till the end became dark


Shooting deer at a lick differs but little from the mode just related, if the lick be a natural one. The plan is to climb a tree, to the distance of thirty or forty feet, and there make a nest of limbs to shade the hunter. Then either a few coals of fire and some fine splinters, or a large candle, is tied to a pole like those used in fishing, and a place is fixed to lay the pole on after the candle is lighted.


When the deer come to the lick, the candle is laid as near over it as the length of the pole will admit, when the light will display the entire body of the deer and the sights of of the gun as plain as they could be seen by daylight. The deer will sometimes stand until they receive a second and a third shot ; so perfectly astonished are they at the blaze of the candle and the thunder of the heavily-loaded rifle. They become confused, and seem to lose their senses for a time.


The way to make a deer-lick with common salt, is to select a place where the deer have found a crossing, and near which is a tree, on which a convenient seat can be arranged at a considerable elevation. Then take a small stake, drive it into the ground to the depth of eighteen inches or two feet, and fill the hole made by it with clean alum-salt. Make three or four such holes, fill them all, and sprinkle a little salt over the ground around them. The deer will soon find the place, and come often to lick the salt, while the hunter, sitting high up in the tree, has every chance for obtaining a fair shot at them.


One story from Meshach Browings narrative that reminded me of my friend the rumor spreading Dutchman ( Mr. Schrecengost) was the following:


On examination, I found my first ball had passed along his back, under the skin, without doing any injury ; and then I felt certain that I had overshot my mark the evening before. I then put up a snow-ball about sixty yards distant, and shot at it, and found that my ball struck about eighteen inches above the mark. This gave me the fidgets ; and putting the gun between the forks of a tree, I gave it a bend downward, which made it very crooked. I put it in again and again, until by frequent twisting I got it so that it would shoot a ball within six inches of a mark. I then concluded to try if I could kill with it in that condition.


After shooting with the Dutchman I’ve seen him suffer from “the fidgets” a few times. It’s also another example of Rifle tweeking that I’d love to see in action (like removing the breechplug with a tomahawk).


Tome also mentions carrying an “auger” with his hunting gear to drill holes into logs to make salt licks. As well as this nice description of jerking deer meat:


We now brought our venison together, and built a scaffold upon which we placed it to dry. It may be well here to describe the manner of preserving elk's meat in the summer. It is firs 4- cut in thin slices, and salted down in the skin. We always carried a bag of salt with us for that purpose. Two large poles are laid across crotches about five feet high, and a number of smaller ones are laid across these. After the meat has lain a sufficient length of time in the skin, it is spread upon this scaffold, and a slow fire built under it. The fire is gradually increased and the meat turned until it it dried through. In t'us state it is called jerk.

So looks like Now I’ll need to add a decent auger and bigger bag of salt to my 18th century hunters shopping list (salt for making Jerk of course…Shut up Duane)  Well I should get back to work trying to keep the pipes from freezing and trying to thaw out a frozen raccoon for skinning. I thought I had reached the pinnacle of angry Wife disease when I messed up skinning a skunk in the backyard but I guess one should always warn others that there is a dead animal hanging in the basement. I have a few more posts ready to go: an interview with Jim Jacobs of Blue Heron Mercantile, more on snuff boxes, hunting equipment  so here is to 2014 without ADD….Lets go ride bikes.
Phillip Tome's Memoir
https://archive.org/details/pioneerlifeorthi00tome
Meshach Browning
https://archive.org/details/fortyfouryearsof00browuoft
Posted by Nathan Kobuck at 11:22 AM