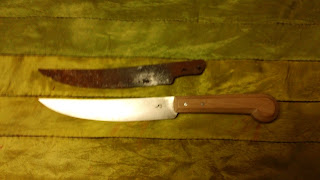 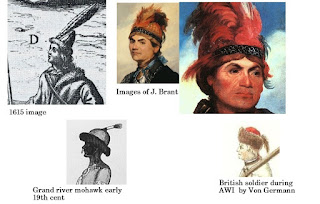 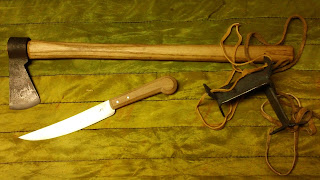 Some of Eric's Work 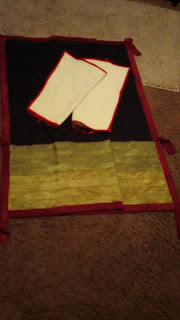 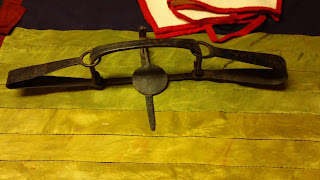 As I’ve shown already one of the thing I obsess about is period headwear. I’ve done a number of outing with folks dressed as natives who complain about “being cold”  as the snow falls on their bald heads (roaches don’t cover a lot of surface area) It’s as if looking like the cover of a magazine has more influence on their kit choice then the period info. (As usual I’ll blame John Buxton for this…He hates all hats unless they have Steelers Logo’s…cant blame the guy. I cant wear my purple leggings this year because of the stupid ravens…)

One hat I’ve avoided since I started the hobby is the “Canadian Cap”. I couldn’t stand them, in fact I’d say I hated them and all they stood for (no idea what that is…).  Then like the hunting shirt I have started to ease back on my hatred of them over the past few years (Turbans are the gateway drug). I cut one out and it sat in my sewing pile for a while, I’d pick it up look at it and then start sewing something else.

This is why it’s awesome to have smart friends…Mike Galban pointed out to me a theory he had that Brant might be wearing one in the Gilbert Stuart Painting. Galban then went on to make a repro cap based on this idea…and wham, it worked. Ok so playing devil’s advocate (is there any other kind?)  I thought maybe this was Brant just “branting up” something he’d have access to from his ties to the British military…well then I came across a 1615 image of a native with what appears to be another Decorated “Canadian style” cap (maybe we should call them First Nations caps...) This also made an image that I had seen a number of times “Grand Rivers Mohawk”  make a little more sense (without the Canadian cap context the guy looks like a candidate for Ancient Aliens)

A sweet quote on Brant wearing a Fur capin the 1790’s can be found in Mrs. Simicoe’s Diary:
“Capt. Brant dined here. He has a countenance expressive of art and cunning. He wore an English coat with a handsome crimson silk blanket lined with black & trimmed with gold fringe & wore a fur cap….”

So here we have another style hat for native reenactors to wear and one less excuse to stay inside after September. Also now Thanx to Galban I now have yet another cap to throw on the pile (are people getting the idea yet that natives wore hats? DO I need to proceed to workman’s caps next week? I can)


I went with the red binding as he had “red ferreting” in his inventory when he died (I already own too much blue stuff) I also thought it was interesting he had a fur Cap…is it a Canadian cap? Not 100% sure but now it’s at least an educated guess.

A few pieces of gear I’ve been looking forward to showed up this week .An English tomahawk, Pistol Grip knife and a pair of ice creepers. These were all made by Eric Schatzel  and like all the stuff I’ve seen Eric hammer out are very well made and dead on. The knife is wicked sharp and the blade has the flex in it you find in original blades (just right for skinning) The knife shape is based off an original blade I own that matches to the profile of the knife being held by “Stalking Turkey” in the  portrait. You can see the pistol shape to the handle just under the figures little finger. Another Pistol grip shape on a scalper can be seen in the Roger Townsend Monument in Westminster Abbey
http://www.westminster-abbey.org/our-history/people/roger-townshend

The statue was based off a live model and nails a number of the small details down that could only be captured by someone who saw the stuff first hand. I wanted a pistol grip knife because I found references to them being shipped to Fort Pitt in the 1760’s.  I also wanted to show folks that what many refer to as “longhunter knives” really aren’t.

The Tomahawk is based off archeo. Examples from a number of native sites and are representative of a plain jane round eye trade hawk. I wasn’t sure on getting Ice creepers then I came across an example found at the Fletcher site in Michigan. I’m still looking for more examples from native sites. Hopefully I’ll have more on these later.

Also for the hell of it I’ve posted a few pics of a matchcoat I finished up (started last spring) based matchcoats found in a few period images. I’ve decided to go back and sew on a red stripe at the top of the green panel (after I looked at the images I complied for the posting…dam you Galban). I’ve also posted a few pics of an original Beaver Trap I picked up from Wil “don’t come to my rendyvous” West. I was going to post some more images of beaver traps but that blew up into a whole Thesis in itself. Since this is the new Kinder, Gentler Buffalo Trace (gotta prove we’re adults now, we’re not a punk rock band we’re new wave) I’ll be posting some stuff tomorrow on packs.
Posted by Nathan Kobuck at 2:57 PM