All I got for christmass was a lump of coal and a southern shot bag... 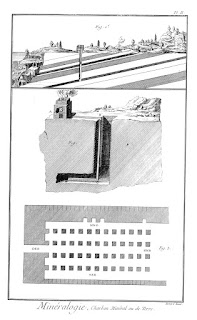 Coal Mine from diderot...find the same thing near Fort Pitt 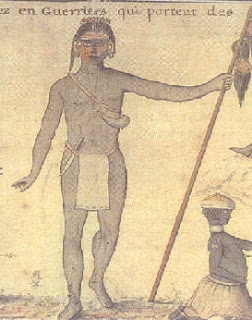 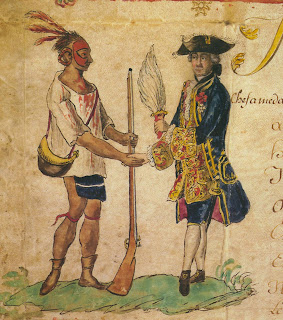 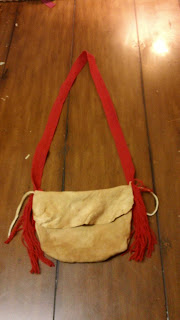 My take on the Commision bag 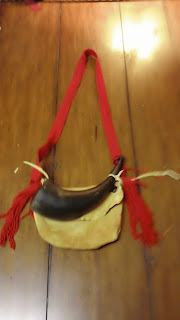 Bag with Horn attached...It works despite the fact I dont want it to....


Dam you guys like eared caps! Who would have guessed that one? So as a result I’m putting up a pattern for folks all I ask is you not make it out of an army blanket for events, use red beads on it or put a roger’s rangers pin on it. I personally find that if I have an original idea to do with a reproduction it’s more than likely wrong. White heart beads are not your friend.  (I’ll post the pattern Saturday night)


So to keep my posts as random as possible I’m now going to switch gears yet again. I started a write up about fur caps but put that on hold until I finish My Canadian cap, Like I need yet another piece of headgear. Turbans, knit caps, cotton caps, eared caps, tuques…My family think I’m nuts.  So I’ve decided to make another shot pouch!!!


I decided to make a copy of the pouch from the image found on a French Commision for a SE Native. This is one of a handful of images of Cherokees from the 18th cent and when looking at a good copy of the image some really nice details come to light.  I’d put off making the bag because well….I have to make other stuff.   I’ve been making a lot of stuff lately for a number of Cherokee folks and the lack of extant artifacts is always a problem.  I’ve already done a write up on a possible version of the “otter shot pouch” mentioned  in Adair and other sources so I’ve made a number of those  but the “commission” pouch was something well I guess I needed to make to show ppl what it “could” be. (make sense?)


To make the bag I took the image and blew it up to roughly life size to come up with a rough estimate for dimensions.  I then cut out a simple D shaped pouch sewed it up with Linen thread and knocked out a plain red oblique woven strap. I went with the oblique weave as it pops up in a few quasi dateable SE pieces.  For the strap another easy fix could be red wool tape but since I’m a weaver and all the red tape in my house goes on blanket coats this was an easy fix for me.


The bag is roughly 8 inches wide by around 7 deep. I attached the strap to the bag with thongs punched thru each side. Now comes the speculation part I’m not 100% on. I used the thongs that attached the strap to attach the horn to the bag…and it works nicely. I didn’t want it to…but it does.  Wallace Gusslar has surmised over the years that this was an example of an attached bag/horn set and is the basis for the later bag/horn combo’s.


Personally…I don’t know.  It’s a big jump from this image to the commonalty of this process you see in the 19th cent. Could this be a SE thing?  If you examine the DUbatz images you can see an odd ball rig being worn for a powder horn. Is this bag rig a variation on this style?  I have a horn strap like the one pictured in Dubatz and I’ve found a slit pouches rides awesome in this set up….but are slit pouches common in the SE?  ARe the mentions of “otter shot pouches” all shoulder rigs like vonreck  or  are they skinned out otters that can be used like a slit pouch…….SOOOOO MANY QUESTIONS!!!!


Ok my point from this….This is my take on the pouch in the image. To me this is an educated guess at what might be going on in the image. No more no less.  I’ve seen a lot of fads tossed out there about SE stuff over the years ( twined bags are common in the SE…the guy who spread this one also made and sold twined bags, He also used Ben hunt books as the basis for all his twining,  Quilled SE turkey foot bags…despite geographic range of porcupines and the origin of the Moc the design was taken from)   Pretty simple design, pretty simple materials….I’m also gonna be extra crazy and NOT decorate it (is your mind blown?)  No paint, no cones, no beads…nothing.


So with pretty basic materials you can knock out a SE shot pouch for little cost. Honestly for around $140 you could buy a hide and some wool tape  (Ike waters has a nice how to on making mocs similar to the Aberdeen moc) and have a nice pair of SE mocs, garters and bag (wool tape is nice gartering…looks like the guy in the image may be wearing some huh) Take the extra $  you didn’t spend on weirdness and buy a book.


To keep the randomness going Here is some kewl info on Coal mines around Fort Ptt in the 18th cent.  Yes they used coal to heat stuff around the fort. If you’re from western Pa this shouldn’t surprise you since your house is probably built over an abandon coal mine.  A neat detail to my geek eye the diagram in Michael’s  Journal (not posted here but you can find the whole journal in google books ) is dead on for the Diderot plate diagram.


“Our business being finished we decamped, and began our march for Fort Pit, where we arrived in the middle of November 1764, and remained there all winter, and the better part of next summer. During our stay here, we were employed in bringing coals into the garrison, over the ice, in bags made of cowhide. The pit from which they are extracted is on the other side the river Maninghally, where it is supposed there is a very large mine there."

David McClure  Aug 21 1772…The village is about ¼ mile distant & consists of about 40 dwelling houses made of hewn logs & stands on the bank of the Moningehala; opposite on the south side** of the river is a hill of several miles in length, running parallel & extending to the bank, which appears to be a body of stone coal. It took fire accidentally a year past, & has formed a small by the caving of the earth. The coal is used by the inhabitants.


“a Journal of the whiskey Insurrection”


Nov 17th  “I then Proceeded until I came to a stone cole mine through a strange woodland, the phenomena of which I had several times heard of. I went into the mouth thereof and called into it, if they would admit me; which eched and rolled for a minute nearly seemingly as an huge hollow vessel and was answered from within; which I could not comprehend, but thought they forbid me entering. I waited a moment, much disappointed; at length there came one of them out of the cave, and I then asked him to take me with him, which he seemed willingly to comply. He then Hallooed to some within to bring him a candle to light a stranger in, in French, and soon came one with the candle and black as the devil, enough to frighten one. He then ordered me to follow him in broken English, through a long entry, seemingly strongly smelling of sulphur, and yellow fat liquid running along the walls and under foot which they have laid with planks to make it more easy to wheel the cole out. They Then led me along gangways that intersected or run across the first. I was soon lost within it and suppose I could have with difficulty found the way out again. To give a more plain description of the cave will be by illustrating it as below. They were all French men that worked in it; They appeared as so many beings from the bottomless pit; they looked consumpted and emaciated”

So that’s my random weirdness for the week.  Did the Cherokees scouting for the English fill their D shaped pouches with coal?  Not a clue….But I do know it’s snowing out right now so Rather then drive to Niagara I’ll be spending the morning hunting. Who knows I may even take out the new Shot pouch…or the blue plush one…or the otter one….or the one I rigged up based on Doddridge and Alders descriptions or….I’ll just stick stuff in my pockets.  I need help.  Before I forget  Mike Galban has started a really sweet blog  called "Edge of the woods" http://edgeotw.blogspot.com/   He's been posting some really great stuff. For example I learned he's a middle aged man...didnt see that one coming. His fire arrow craze is no older then 16 at the most....
Posted by Nathan Kobuck at 10:38 PM