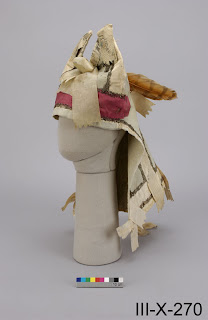 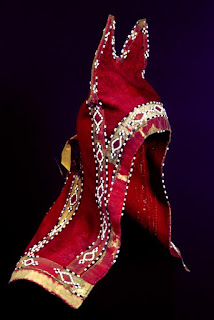 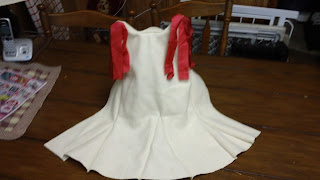 Back view of my hood 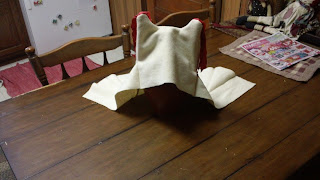 Front view...Yes it looks a little goofy but it works
So happy new year!!  This is the part is I gripe about being a slacker but you know the drill so lets move on. I’ve been really busy over the past few months hunting, reading and trying to learn skills and ever tweeking my gear.  First off the winter gear I’ve been amassing over the past 3 years has spent more than a few days in the woods and I’m glad to report that the guys who wore it knew what they were talking about (who would have guessed it). chausons, blanket coats, underjackets and the like WORK!!!!
I have however found I am lacking a pair of good ice creepers . A fact I found out while chasing a squirrel  at dusk during  a full moon. Let’s just say when he stopped and posed in the moonlight for the perfect shot…my feet kept going forward.  My back found a great piece of limestone to break my fall.  As I lay there writhing in pain and cursing the moon the phrase “look into ice creepers” passed through my skull.  So like many Kobuck hunters have done before me  I stood up shot a stump in anger and limped my way back home (the stump got away too)


One item I am always messing with is new head ware.  Fur Turbans, Scarves, hats, knit caps I’ve got them all.  It’s one Item I revisit every few posts and the reason is simple. There were a lot of options in the period.  I’m still surprised at how many Native reenactors I know that do nothing in the winter or fall.  To me it seems many folks are more focused on stuff to tie to their scalplock (turkey roach bushes as far as the eye can see!) then they are at well…thinking.
We all know that you lose heat thru your head (your mom probably spent years telling you this) You spend time in the woods in the winter and your going to get cold. You have a shaved head…your head is going to get…come one…You got it it’s going to get cold. So I’m going to spend some more time on yet another piece of headgear. The Eared Cap.


Many folks are familiar with the wool “peaked” or “Micmac” hoods worn by natives during the 18th-19th cent. I’ve talked a little about these in the past and this will cover them a little as well. One variation of these caps is the “eared cap”. This is a cap made from 2 or  more pieces of wool That are sewn together and the top of the cap from the front gives the appearance of two upright “ears” (Think Fin from Adventure time…don’t know who that is ask the nearest 12 year old)


Many people are familiar with these in the context of the western Trappers of the 1820-30’s period especially from the images done by Alfred Miller (Shawn Webster put out a nice article on these in “on the trail a few years ago) they do however show up in the east as well. The earliest example I am away of the depiction of an eared cap is from a possible Late 17th century Maskette found in western New York. The figure clearly shows a head with what looks to be an eared  cap (sorry but I’m not going to post images of a maskette or mask out of respect for  my Haudenosaunee friends the item is in the collection of the Rochester Museum)


An 18th century example of an elaborately decorated eared cap can be seen in the collection of the New Brunswick Museum. The cap is part of a suit that was owned by a chief (great chance to see an original clout, matchcoat and leggings as well) The suit is dated from the 1760’s to 80’s


The cap also appears on a doll collected during the 18th century and is currently in the collection of the Musee de neuchatel. This tiny cap is killer it’s made from greenish wool and has both ribbon work and beading on it. (ok before I go on I’m sure you are noticing the lack of images of some items well I’m providing the site they are located at  If so if you’re really interested in getting the images  contact the site. When I have them I’ll post the collection #  After the past few months I got tired of repeatedly seeing images resurface all over the web and being posted as the research of others. I’ll lead the horse to the bucket but you need to find the water)
In the Ohio country there is some anecdotal evidence of them being worn as well. In his narrative Isreal Donnelson mentions: “I made signs to him that one had taken my hat…took down and opened his budget and took out a sort of blanket cap, and put it on my head”


This could be a peaked cap as the description doesn’t really nail down what this “blanket cap” looked like. Then I came across this reference and BINGO.
“ A very Nice Indian cap and a gun stick were found where they camped. The cap was made of two pieces of white colored cloth with two red tassels hanging down, one on each side of the head, at the corners that stuck up” June 1790’s in Kentucky James Wade


To my mind this is clearly describing an “eared cap” And what I find really killer about it is that’s it’s in Kentucky!   A cap similar to this description is located in the CMC ( artifact  III-x-270 ). This cap is attributed to the Micmac   but clearly has the same characteristics as the other caps shown/described. (multiple views on their website to get an idea of how to make a pattern)
http://collections.civilization.ca/public/pages/cmccpublic/emupublic/Display.php?irn=37001&QueryPage=%2Fpublic%2Fpages%2Fcmccpublic%2Femupublic%2FQuery.php&lang=0


The pattern I based my cap from what drawn up by Mike Galban and was based upon the NB cap as well as  images of northern hunters (check Ike's blog for more ideas).  If I was doing this cap again I would opt to simply use the two piece construction described in the narrative. I was a little doubtful of how useful this thing would be in the woods but I was pleasantly surprised at how much I liked wearing the cap.  The hat did shade my eyes enough to see in bright sunlight in the snow as well as when I was scanning treetops for the one that got away. I didn’t notice the height of the ears (I thought it would feel like wearing a top hat).
So with the cap appearing in different forms  from the maritimes to the great lakes to Kentucky this opens up this style over a broader area (east coast thru the great lakes and the plains….Ike will cover the rest) and  for those folks looking for regional “styles” there are a few examples out there (or be kewl and go with simple)


So in keeping up with the Fur trade feel to this post  in honor of the Red Leg Mess’s recent scout and Beaver trapping foray (BTW RLM it’s awesome to see a well dressed and read group of folks getting out there and doing stuff like it was done…and not bursting into flames) I thought I’d post some trapping info for those of us from the Anglo side of things:


“ I was aquainted with several men who were called longhunters…The longhunters usually set out the first of October, each man carried two horses, TRAPS, a large supply of powder and lead and a small hand vise and bellows, files and screw plate for the purpose of fixing guns..”  John Redd


“we had 4 beaver traps or steel traps, about 8 inches across in the jaws, when extended…our bait was from the belly of the animal itself.” James Wade


“About two feet above the trap, a stick, about 3-4 inches in length was stuck in the bank. In the upper end of this, the trapper excavated a small hole with his knife, into which he dropped a small quanity of the essence, or perfume, used to attract the beaver to the spot. The stick was attached by a string of horse hair to the trap. And with it was pulled into the water by the beaver. The reason for this was, that it might not remain after the trap was sprung, and attract other beavers to the spot…..The trap was connected by a chain of iron six feet in length to a stout line made of the bark of the leatherwood, twisted into a neat cord ,of fifteen or twenty feet…the end of the line was secured to a stake drove into the bed of the creek underwater”  From Biographical sketch of Issac Williams (reprinted in Payne “narrative of pioneer life and border warfare”)


“beaver skins were stretched within hoops, generaly of grapevine, and dried”


“ A chain is attached to the trap, which if not long enough is lengthened by a cord, together making twelve or fifteen feet, and the other end fastened to a stake on shore.” Nathan Boone


And finaly to help you think about sunny days and warm weather  an account of a native commando raft to cross  rivers in July:


“The Indians would often have a dried deer skin with small holes plentifully inserted along the edge by which to fasten it on a hoop to use as a canoe. In these little boats they would put a gun and budget and swim behind, pushing it over the stream. When Dry, they would use it as a blanket at night. This was quite customary.” Nathan Boone
I am so on trying one of these out this summer…or maybe in april at the school of the longhunter…but  probably july. I’ve been digging up more and more on the use of small rafts for keeping your stuff dry. But that’s a whole other post . Also to quote Mike Galban and Ward Oles when working on this “ don’t quote me on this but Eli is dumb”

Here is some more info On hoods put together By Ike Walters….great minds think alike and sometimes we do too.   http://frenchinwisconsin.yolasite.com/my-blog/hunters-hoods
Also being a super genius of Wiley Coyote esque status Ike has also started a new Msg board that is more focused on the research/DOING side of the hobbie:
http://councilfire.freeforums.net/index.cgi
Well I should be off to Bed I'm heading to the Bushy Run Antique gun show in the morning with a few friends. If this snow doesnt let up I may be heading to the woods instead to scare animals in my white devil hood. Ok I'm back to writing please stop all the death threats geesh...
Posted by Nathan Kobuck at 11:13 PM