Robinson Crusoe had a giant Cartouche knife and Friday knew how to read... 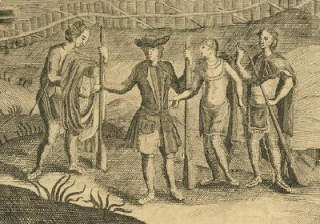 1752 image   Mocs and leggings with a coat and hat 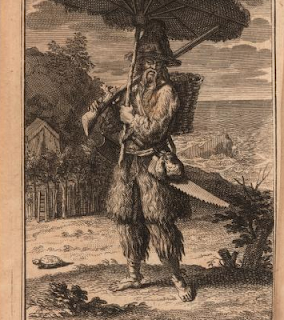 18th cent. Image of Robinson Crusoe...leather/hide clothes, beard, giant knife thing and axe tucked in a belt....SO many jokes...Ya I'm gonna walk away from that one

So I got a pretty good response from the last posting. No hate mail (yet) and that’s always encouraging. I figured I’d point people towards some “must have” books this post. My advice for new folks is that you should spend more money on Books then you do quillwork. Of course after a while the books become more expensive then quillwork (I need a $300 book right now…I know need is a strong word but I NEEEEDDDD this book….unless I can get it thru Interlibrary loan)

Anyhow…Over the years some books I find myself going back to time and time again to double check info or just reread. I find that the more I reread some books info pops up that I totally overlooked the first time. For some reason “scouwa” the James Smith Narrative is one of these books. I first read the book in 1995 in high school and for me it’s been a constant go to book  when the ADD kicks in.
A few other books I really think are  worthwhile investment for folks:
“Observations on the American Backcountry” By Donald Rettig:  This a “bearing is noble and proud” type book for reenactors. Mr. Rettig breaks stuff down such as hunting shirts, breechclouts, drinking etc from period Narratives. It’s a great jumping off point for new folks as well as a quick go to for when you think you remember a quote from that book, by that guy, about that thing.
“Contact Points: American Frontiers from the Mohawk Valley to the Mississippi, 1750-1830” Andrew Clayton:  This book is a collection of essays on the Backcountry by a number of respected authors. Ok I know some authors out there in the “hobbie” blast any modern historians work as some kind of Liberal conspiracy to make the backcountry a socialist utopia (while somehow their books are above critique and agenda free)  This book is a great starting point to lead you to some killer books that will really open up your eyes/mind to looking at the backcountry in a new way.
“Chainbreaker's War: A Seneca Chief Remembers the America Revolution by Blacksnake”  If ya like reading Shane/Draper interviews you’ll love this book. It’s An Interview with Blacksnake a Seneca who fought in the Revolution. Some really kewl little tidbits about backcountry war parties and native life. Now if you Like reading Francis Parkman’s stuff you might not dig it (Am I the only person who can’t stand Parkman’s stuff? )
Any of DALE PAYNE’S BookS:  Ok I don’t get a kickback from Dale for pimping his books. He’s done a great Job of compiling Info and letting it speak for itself. You can get his books from a number of sutlers or contact Prickett’s Fort at info@prickettsfort.org (304)363-3030
“Westward into Kentucky: The Narrative of Daniel Trabue by Daniel Trabue”   Awesome narrative (looks like it was written by Alan Krause) some great info on how folks moved into Kentucky as well as 18th century backcountry life.

“Textiles in America 1650-1870: A Dictionary Based on Original Documents, Prints and Paintings, Commercial Records, American Merchants' Papers, Shopk (Winterthur/Barra Book) by Florence M. Montgomery”:  Ok once again some folks will blast the idea of anything but nettles for cloth but….This book will answer A ton of questions that might pop into your skull from reading narratives, ledgers etc. This is a must have for anyone reenacting the 18th century and want to improve their kit in anyway. You don’t need to count threads to enjoy this book.

SO that’s just a few books I recommend to folks. I’ll be posting some more as the summer goes along. Also don’t don’t, don’t forget about google books. A LOT of period narratives are on their and readable for free. This way you can save yourself a lot of $ to buy more books, its part of the sickness that is this hobbie. I’m running out of shelf space myself…and the piles of books next to my weaving chair are often the flashpoint for family debates.

To add to the weirdness I got a recent update from Mr. Crowder. He recently received a copy of the “crazy crow” Cartouche Knife. His review of the product was pretty short and sweet…Don’t buy it. In his words “it weighs as much as a trade gun”.  Crowder is a pretty good judge of the minutia that goes into a trade knife so if you’re looking for a good copy of this knife…looks like you’ll be spending more then $30.  If you’re in the market for a Knife I do know “At the Eastern Door” has some killer scalpers made by Eric Schatzel drop him an email for details.

This brings up a question I’ve been asked a few times this past month. How do I choose stuff to review? Well Normally it’s just stuff I need for my kit and pick up from a vendor after doing research into the item myself. Doing a little pre buy research I then know what to ask the vendor/craftsperson as far as their product goes. 99% of people making a quality item can then fill in the blanks for you on the product.
A few items I’ve reviewed were given to me by the maker to do some “field tests” on (The South Union Mills stockings and Jed Wray likes how I try and destroy his stuff) But honestly if I didn’t like the item I would simply send it back to the maker or pay for it and put it in the bin of stuff I don’t use. I really don’t want to give anyone a BAD review so I simply choose to not review items I don’t like. I will however reserve the right to complain about blanket pins, squirrel cookers, woven garters with leather tabs, coverlet haversacks and Items from BIG vendors (like the crazy crow cartouche knife) as these vendors cover such a large cross section of hobbies me saying a knife isn’t quality really won’t hurt them at all.
To add some eye candy I’ve posted two details of images I came across in a late night Coca cola fueled web search (ya I’m back on the soda…got its hooks into me again) One is a detail from a 1752 German image from an early Narrative showing a European man in a coat, hat and leggings and mocs.  The narrative can be found here (Thanx Joeseph): http://books.google.com/books?id=OGdCAAAAcAAJ&dq=Aventures+du+s.+C.+Le+Beau%2C+avocat+en+Parlement%2C+ou+Voyage+curieux+et+nouveau+parmi+les+Sauvages+de+l%E2%80%99Amerique+septentrionale+dans+lequel+on+trouvera+une+description+du+Canada+avec+une+relation+tr%C3%A8s+particuli%C3%A8re+des+anciennes+coutumes%2C+m%C5%93urs+et+fa%C3%A7ons+de+vivre+des+barbares+qui+l%E2%80%99habitent+et+de+la+mani%C3%A8re+dont+ils+se+comportent+aujourd%E2%80%99huy.&source=gbs_navlinks_s

The second image is a detail from a painting entitled “a view of St. Johns…” and was done in the 1780’s. Nice detail of some natives hanging around a fire as well as some guys sleeping under a canoe. The whole image is pretty sweet Canadians, guys in canoes. It can be seen here: http://jcb.lunaimaging.com/luna/servlet/detail/JCB~1~1~1638~2570001:A-View-of-St--John-s,-upon-the-Rive?sort=IMAGE_DATE%2Csubject_groups&qvq=w4s%3A%2Fwhat%2FArtifacts&fb_source=message

Well summer vacation has begun so let’s see if having Jr. Gingi wrangler home helps me get more stuff finished.
Posted by Nathan Kobuck at 3:07 PM