More Matchcoat weirdness or the time I lost 24 friends in the woods... 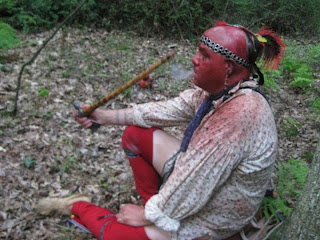 My name is Mike Galban and I'm kickin it Brant Style 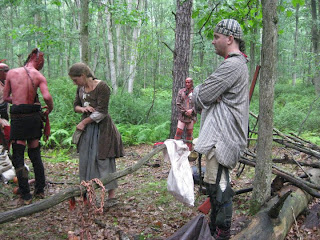 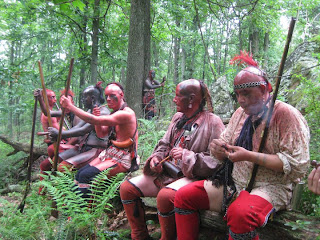 when tracking a war party look for red/black butt marks on logs... 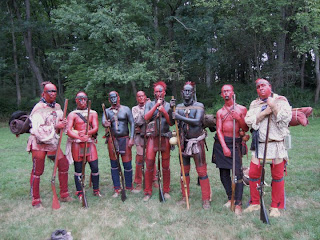 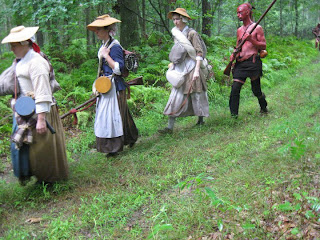 Jo sporting the waist wrapped matchcoat....also a good image of the way the ladies of the ACM carry gear....Aprons just arent for looking pretty


Well this summer has gone flying past. The past 2 months have been..hectic to say the least. Between getting stuff ready for the CLA show and getting ready for my event time has flown by. I have been able to get enough woods time to keep me from driving my family crazy however. I understand now why my grandmother used to “send my Pap to the camp.”
I’ve been able to keep busy as well reading and re-reading a lot of sources. It’s funny how when you spend enough time in your gear or around other folks who do certain things in narratives all of a sudden details you’d not understood just pop out at you. I found this happen to me at my “Phillip’s Massacre”.
This years event was small but the quality of folks who turned out was very high IMHO. Members of the Augusta County Militia took on the guys (and gal) from Capt. Bull’s war party. The scenario was pretty simple a group of the ACM ladies were acting as refugees and tried to avoid capture while the Ranging company and war party scouted the area for them. The event showed just how hard it is for two small parties to find each other in a large area.
The event for myself and Eric Schatzel turned into a trek/tracking exercise as we tried to find the war party for him to join up with. Did I mention it was raining? Yeah it was raining…A lot. Watching the war party move out and threw the woods when Eric and I found them (8 hours ,1 fire and meal of nasty jerk broth later) Is when a period description clicked.
Joseph Privet was traveling light as always (the boy can live off nothing) and was able to adjust his matchcoat quickly into a number of different styles of wear. When running/scouting I noticed he was wearing it around his waist. This style of wear matched up to a quote from an interview done by Jeptha simms:
(near fort Hunter)
He went into the barn and brought out his arms full of tobacco (most of the farmers then raised a patch of the plant), which he laid down and began twisting into suitable hanks ; and as often as made, thrust into his blanket above the belt which encircled his waist.

To my minds eye Joseph nailed this. I have often worn a matchcoat “chubby Mohawk style” when sitting on a deer stand but always found it was not easy to move quickly in.
The CLA show was a blast.(Esp. when Chris Anderson tracked me down to tell me the West Memphis three had been freed! Thanx again Chris) I hung out with the usual cast of Characters and as usual we stayed up too late talked too much and had more fun then we should have. It was also a great chance to look at some original items up close and personal. I’ll post some pics of the weekend as soon as I can figure out who in the group was taking all the pictures. Thanx to all the folks who stopped by for the kind words about the blog I’m really amazed at how many folks are reading this thing. Well now things are winding down for the season (or are they?) I can get back to posting more historic weirdness….and weaving with the tiny tiny yarn and finishing up my sky blue cappo and stroud cloth blanket coat...it's crazy red