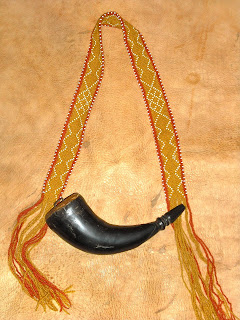 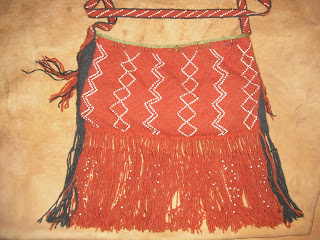 The "Murse" This bag is huge! 10 inches deep by 16 inches wide woven in the round. Original is in Denver Art museum 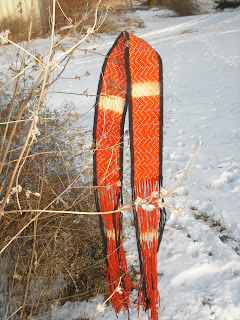 Sash now owned by Crowder. He called to apologize for buying finger weaving from someone else. It's ok I would have bought it too 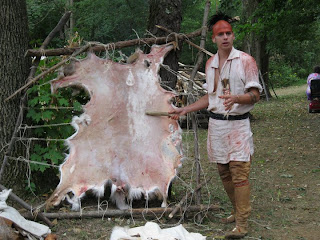 There was some talk about shot pouch strap lengths on the FF board (this is just for you Gus) so here is a quick quote from a mention in William Bigg’s narrative: http://www.gutenberg.org/cache/epub/26799/pg26799.txt

William Biggs Narrative mention of shot pouch strap length:
I thought perhaps the Indians would give me a
long chase, and probably that they would hold out better than I could;
although at that time I did not feel the least tired or out of breath. I
concluded to throw off my two coats and shoes, as I would then be better
prepared for a long race. I had my great coat tied around me with a silk
handkerchief pretty much worn--I recollect tying it with a slip knot,
but being in a hurry, it was drawn into a double hard knot; I tried some
little time to get it loose--the longer I tried the harder the knot
seemed to get, that stopped my running considerably; at length I broke
it by some means, I do not know how. In the morning I forgot to put on
my shot pouch before I put on my great coat, and then put it on over it.
I pulled off the sleeves of my great coat, not thinking of my shot-pouch
being over my coat, it having a very short strap, the coat got so tight
in the strap that I could not get it loose for a considerable time.
Still trying, it hung down and trailed on the ground, and every two or
three steps it would wrap around my legs and throw me down, and I would
catch on my hands and knees, it served me so several times, so that I
could make no headway at running. After some considerable time, I broke
the strap and my great coat dropped from me--I had no knife with me.


Guy sporting multiple coats and no knife…..scandalous. I’ve been spending the past few mornings looking pretty closely at A LOT of sources for shooting equipment/Practices information from period sources (thanx Galban This project could easily turn into a book after you got me started) SO Friday I’m hoping to put up some solid references to pour a little gas on the to patch or not to patch message board wars. I would like to point one thing out however....I'm finding ALOT of crazy info and equipment refrences but I'm finding NOTHING that points to bullet boards being used. It doesnt look good folks...

So one of the reasons I started doing this blog was to do product reviews so I thought tonight would be a good time to post a new one. More of a craftsmen review then anything and it’ll probably startle a few folks. I’d like to spotlight the Finger weaving/brain tanning of Alec Foreman. (I was going to talk about the OG Tom Conde’s stuff first but he still needs to email me back the questionare hint hint Tom ;))Yes I know I’m a weaver and no I’m not getting out of the game. As someone who looks at weaving A LOT I have to say that Alec’s stuff is top notch.

Alec does a great job at beading and his tension is really even and not too tight. This means when you lay a sash out for example its straight as opposed to the “snake” look you get from a piece that has mixed tension woven in thru the piece. He also uses the correct Yarn which makes a big difference in the look of each piece as well as the feel.

In talking to Alec over the past few months His drive to make the right stuff has knocked me out of a few year slump (complacency will kill ya) and pushed me to step up my game. He’s also been a fresh eye in relooking at a lot of pieces I personally had been looking at for a long time and he brought some new details to light. My advice is to keep this guy in mind if you’re looking at getting a fingerwoven article before his prices go up or he stops weaving. If ya see something he’s made for sale on CLA it’s going to be worth the $ (I’m still on the fence about ordering a sash from the guy and I make them)

As well as weaving Alec does a great job at brain tanning. I picked up 2 hides from him at Martin’s station last summer and have made a number of projects with the hides (summer moccasins and winter mocs) And his hides are really well done. The first thing I noticed was the uniformity in the hides. You don’t see a lot of scaring and holes you get when someone doesn’t know how to flesh a hide. The hides are smoked to the point they keep their pliability after they get wet. I wore a pair of mocs from one of his hides everyday this summer at the site I worked at and even after the usual soaking you get from the morning dew (day after day) the hides held up. SO he’s a great source for quality hides (he’d be my first choice for hides and second choice for weaving after this other guy I know…;))

Here is a Q&A I did with ALec
When I met you were doing a longhunter impression why the switch?
When we met I had just started weaving and producing leather, so I wasn't completely ready to make a full blown switch into the Native side of reenacting. It was because of the request of friends and realizing that if I am making the material goods for natives that i should attempt to do a native impression and do it justice, not just a half attempt.

SO what got you into finger weaving?
I first got into weaving when I was in high school. I had the desire to twine and weave a tumpline for myself and called a good friend Maria Fried- Jackson, For instructions on how to twine and weave. Never to finish the Tumpline i started i left it at that. I joined the army and was stationed in Germany and when i met my wife and was explaining the arts and the hobby in general, I started to reteach myself to weave. I only had a basic idea of how oblique weaving was done so there was a great deal of trial and error. During one of these trial periods my wife figured out how to do selvedge edges and she actually taught me that method.
Did you learn from specific book/person?
Maria fried- jackson, over the phone for basic left over right; left over right instructions and Gerald Finley's fingerweaving book as a quick reference. The rest has been self taught.


How do you pick a project?
Currently I pick a lot of my projects based off of original examples and also my own interpretation of original paintings/ sketches. Also what I feel like trying. There is still a huge trial and error factor that plays into every piece.

What is the favorite piece you’ve made so far?
My favorite piece I have made would have to be the resist dyed sash I recently finished. In that project there was numerous things to complete and attempt and I was very pleased with the outcome.

Your quite an accomplished brain tanner is it something you picked up on your own?
Brain tanning was something I had heard of when I first started reenacting, and I had to try it. I had only heard of how the method was done but had never seen anyone actually do it. When i was sixteen I went to all the local butchers and rounded up a dozen hides to attempt this experiment. The experiment failed miserably and I had to re-try numerous times. I achieved my first quality tanned hide about five years ago.

Which do you like better tanning or weaving?
I would have to say it depends on the weather.. I really like them both the same, as long as things are going the way they are supposed to. When they don't thats when I despise tanning or weaving. They really jump back and forth depending on the mood i'm in.

What piece of gear do you think more folks should be carrying doing a native impression?
In my opinion I think the piece of gear that native impressions are lacking is woven objects. Ie. sashes, garters, and even bags. I feel that this material object is underrepresented among native reenactors and we know that they had them.


SO if your looking for Alec’s contact info OR have any questions/hatemail/ ideas for a blog post I opened an email address for the Blog (Nospam)Thebuffalotrace1765@gmail.com
Posted by Nathan Kobuck at 6:08 PM