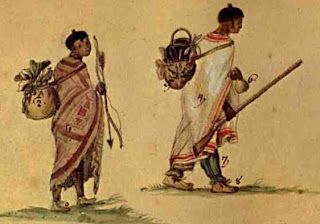 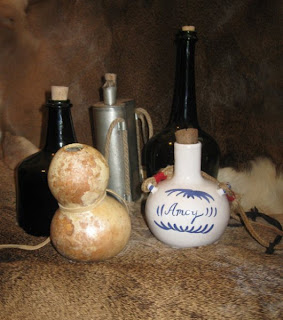 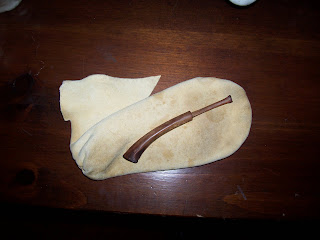 Man do I love fall…now when is it going to start? 90 degree days and 45 degree nights is really throwing my system off. I’m still getting all my gear back in order to head out to the woods for some small game/turkey hunting. Speaking of Turkey hunting I got a nice gift in the mail This morning A wingbone turkey call made By John Curry. I’ve been sitting around using the call all morning to the amusement of my daughter Cindy. I just hope I don’t amuse turkeys with it as much.
SO one of the reasons I started this Blog was I’ve been working on a Native “trekking” article for…well ever. I have a ton of info and paring it down to fit into one article just wasn’t happening. So here I can go Piece by piece the gear I have found that was commonly carried by 18th century natives from what I have found in narratives, journals, ledgers as well as archeological reports and Images.
SO I’ll start off simple…Something to carry Liquid in. I’ve heard a lot of native reenactors complain about just what they should carry water in on a scout. I heard a lot of theories “they just drank from every spring with a cupped hand” (love flute plays in the distance, cue single tear) to “just use a cupped hand to get from over the side of the canoe”….honestly I heard A LOT of “cupped hand” theories which led me to think that those in the hand camp had not walked very far from the Canvas villages.
Then about the 20th time I read James Smith’s narrative “scouwa” I came across a passage that is often used but for the trophy coat guys: " I observed they had a great many bloody scalps, Grenadier's caps, British canteens.." There it was a simple answer to a simple problem. I pointed it out to a few people but the response was stand offish as canteens didn’t seem to many like an item a native would buy.
The more I started digging in the Fort Pitt records other examples of native use of what many would feel would be a totally euro item. Then I found Canteens listed as the goods being sold by Bayton Wharton and Morgan and bam there it was:

The purchase of canteens by natives happens a few more times in the day book. SO for me this was proof of their commonality among the Ohio country Tribes during the 1760’s. Yes I know this is very specific but it was what I was looking for. But the purchase of rum, brandy and shrub of natives at the fort didn’t match up the amount of canteens being sold so I started looking for more documented examples of ways to carry these Items.
The most basic Item is the Glass Bottle. Bottles of many sizes and styles pop up in archeological sites from Michigan to Georgia. The more I looked the more I started finding bottles also popping up in images of natives as well as in a Canoe Model of all places.
One of my favorite images of a traveling native was done by Phillip Von Reck of a Yuchi in the 1730’s. The Image clearly shows (along with notes) a native man wearing his pack as well as carrying a small mallet bottle of “rum or brandy”. A simple easy way to carry water…in a bottle held in your hand. It’s also not a far stretch to assume (there is that word) it would be plausible to carry a bottle of water in your pack.
Another style of liquid container I found in a few sites were Ceramics. The Conestoga site in Eastern Pennsylvania contained some larger ceramic jugs as well as some delftware containers. These same style Containers were also found in Tunica sites in the Mississippi Valley. While both these communities are earlier then most of reenact it shows the ready use of European items for more than just hunting and warfare.
Well I should be weaving. I hope this gave you some new info/Ideas to think about and hopefully try out. Well I should be weaving I have a big show this weekend I’m heading to the “Fine Folk art and Firearms” Show in Greensburg, Pa. I’ll be set up with Mike Galban, Travis Crowder and Mike Burke’s powder horns so stop by and say Hi.
Also if your on Face book check out the new site I put up to show my latest weaving/sewing projects
http://www.facebook.com/profile.php?id=648771937#!/pages/The-Buffalo-TraceTreaty-elm-Traders/148727705165662

Wow way too much self promotion at the end of this one….Next thing you’ll know I’ll start taking myself seriously....get all golem on ya….mmm probably not.

These are great “stuff” books