Moccasin making/repair kit....Or I need to cover my feet it's getting cold 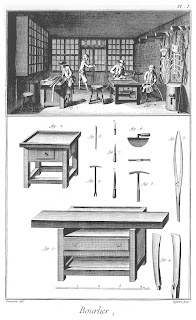 Examples of handled awls from Diderot's 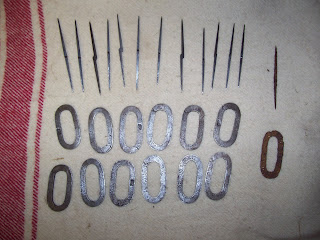 Fire steels and awls by Eric Schatzel....The examples on the fire right are original for comparison 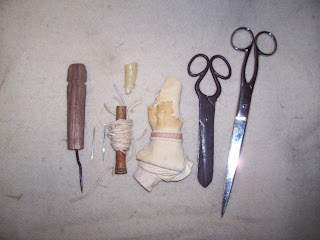 “ Moccasons in ordinary use cost but a few hours to make them. This was done by an instrument denominated a moccasin awl, which was made of the backspring of an old clasp knife. This awl with it’s buckhorn handle was the appendage of every shot pouch strap, Together with a roll of buckskin for mending the moccasins. This was the Labor of almost every evening. They were sewn together and patched with deer skin thongs, or wangs, as they were commonly called.” Dodderidge

So my shoes are all trashed….LOL finally died on me. SO rather then drop the $ on a new pair of shoes I’ll kill again by spring I’m going to start putting money aside to buy myself a custom fitted pair. SO now I have to sit down and start to make myself a pair of shoepacks and some winter mocs. I’ve also decided to make myself a pair of mocs based off an example found in a cabin here in central Pa (private collection) I also have a few orders for mocs from some customers so it seems like a good time to do a run of mocs.
So while I start to get all my ducks in a row for a few days of leatherwork I figured I’d do a little write up on my moc making kit. SO let’s start off with the heart of the Moc making gear the AWL… Doddridge mentioned that moccasin awls were a common piece of gear for backcountry guys. When James Smith Goes on his long hunt with Black Jamie in his mention of his surgical equipment he mentions a Moccasin Awl (with his knife and bullet mould…not a lot of stuff). And yes Doddridge does mention his is made from a back spring so if you want to go that route awesome but there are a Ton of examples of standard Trade awls put into handles (remember kids “trade” doesn’t always equal Native)
For example BW&M hunter Valentine Schope’s purchase on April 21, 1768:

The next part of my gear is a pair of scissors. For the record I avoid the Chinese scissors like the plague. They just don’t do it for me historically or even functionally. I’ve been able to buy a few pairs of original scissors that still held an edge. The other alternative I was able to find is a pair of scissors sold by Avalon Forge. These scissors are better than average alternatives to the Chinese scissors and are pretty good for cutting leather. My family call these my “death scissors” so you may want to sew them a sheath before you toss them into your pack.
The last parts of my moc making kit are pretty straight forward. I have a piece of cane I use to hold large eye needles. On the cane I wrap brain tan wang for sewing the mocs (I stopped using linen thread for mocs a long time ago. The leather holds up way better) and a piece of beeswax candle for putting a point onto the wang I am sewing with. Along with some pieces of brain tan scraps I store this whole kit in a spare moccasin in my pack.
Not too complicated and easy to document. Mocs aren’t that tough to make in the field especially when you have the right tools. Poor walker’s guys wouldn’t have needed to use a bent nail to make mocs if they had read this blog. Now I do plan on doing a moc making blog BUT if you are looking for a great how to on making documented mocs and with a little tweaking real Doddridge shoepacks I suggest you buy Mike Galban’s Moccasin making DVD. My blog is only going to focus on the South eastern mocs and the PA example I’m not going to step on Mike’s toes besides his DVD is way easier to follow then my incoherent rambling.

Sources:
Awls and some killer Fire steels by Eric Schatzel check out AT the Eastern Door
http://www.attheeasterndoor.com/Products.aspx?CATID=12

Scissors from Avalon Forge (the 10 inch scissors) he sells some nice axes as well
http://www.avalonforge.com/MainMisc.htm

Mike’s Moc making video….dont use Artificial sinew now matter how much he cries, RE davis also sells some nice awls made by Bethel Forge (randy Wolfe) I’ve been using one of these awls for 3 years now.
http://www.redaviscompany.com/1044.html
Posted by Nathan Kobuck at 2:34 PM