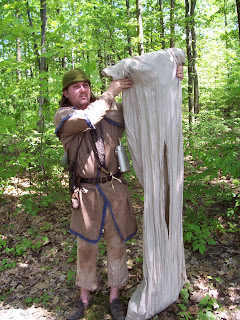 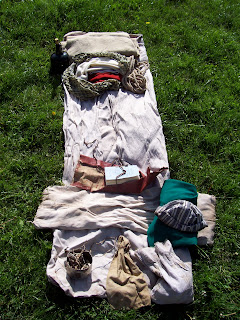 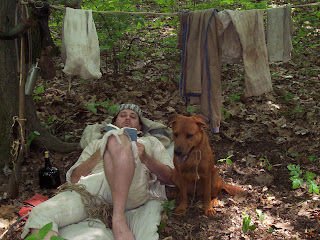 Giant wallet in camp....stuff it with leaves and it's an awesome mattress....Me and Delilah hanging out at my hunting camp....whiskey and a book after I just shot a deer


So one of the things I really hate is….haversacks. I’m not sure why these military items have made their way into just about every aspect of the hobby. I really really hate Coverlet haversacks, quilled haversacks and ones made from old feed bags. I guess in the haversack debate you could put me in the “death before haversack” camp. UNLESS it’s in a military context. Then they rule because it’s one of the few things you probably would have carried on campaign.
My hatred of haversacks is tough to even overcome when I should be carrying one (such as at Brandywine) and man do I really get pissed when it becomes useful (the kind of pissed your dad got when you pointed out to him he was doing something wrong) SO to flagellate myself for having used a haversack and find it useful (even though it was all in the proper context) I decided to post some info on Market wallets.
I’ve been a user of Market wallets for awhile now (like 14-15 years) and honestly they are the shit. I’ve found the use of a wallet/tumpline is the most comfortable way to carry gear and documentable from Bean town to Fort boonesborough. But I’m suspect as I sell/have sold both these items. SO I’ll just focus on a few wallet descriptions then go into some of the ways I’ve found them usefull:

From July 14 to July 21, 1738. RAN away the 18th Day of May last, from the Subscriber living in Stafford County, a Servant Man, named Robert Bird, an Englishman, about 22 Years of Age; a short, well set, Fellow, with a down Look, a full black Eye, and short black Hair: He had on, when he went away, a short Swan Skin Jacket, strip'd with blue and white, One Pair of brown Duroy Breeches, patched upon the Knees, and old fine Hat, Oznabriggs Shirt, a Pair of Plad Stockings, a Pair of Pumps, with large Brass Buckles in them: He had with him a Sett of Shoemakers Tools in a Wallet made of an old Sack Bagg,From September 19 to September 26, 1745. July 29, 1745. RAN away from the Subscriber, living in Orange County, about the 19th Instant, a lusty Irish Convict Servant Man, name'd William Cuddy, aged about 38 Years, of a brown Complexion, with sand colour'd Hair, he is very much mark'd with the Small-Pox, and blind in the Right Eye. Had on when he went away the following Cloaths, viz. a Felt Hat, a Brown Linen Shirt, a dark brown Frize Wastecoat, a Pair of brown Linen Trowsers, and an old Pair of Virginia-made Shoes; he also carried with him, in a brown Linen Wallet, two check Shirts, a Pair of check Trowsers, an old Drugget Coat, with Cuffs to the Sleeves, very much patch'd before, a blue German Serge Wastecoat, a Pair of old German Serge Breeches, of a dark Colour, lined with blue Shalloon, two Pair of Men's Stocking, and a Pair of Womens Stockings:
June 16, 1774.Five Pounds Reward. RUN away from the Subscriber, in Prince George, on Monday the 23d of May, an indented Servant Man named BENJAMIN PARROT, born in London, 32 Years of Age, five Feet six or seven Inches high, by Trade a House Carpenter, tolerably well made, dark Complexion, short black curling Hair, and has a down Look; had on, when he went away, a white Broadcloth Coat lately turned, a Lead coloured Cloth Waistcoat, white Russia Drill Breeches darned at both Knees, a white Irish Linen Shirt, a Pair of white Thread Stockings (one of which is much finer than the other) a Pair of coarse Shoes with very large Silver plated Buckles, and a very deep brimmed Felt Hat; he likewise took with him two new Check Shirts, and a Pair of new Osnabrug Trousers, which he carried in a Virginia Cloth Wallet, marked S M.Pa Gazette adsMarch 29,1786Gloucester county March 27 Run away..an irish servant lad named Patrick tool, about 19 years of age…had on and took with him when he went away, a homespun lead colored upper thick jacket, with a fall down collar and cuffs to the sleeves, patches on the elbows and cuffs of new cloth with wooden buttons, one blue and white striped under ditto, old leather breeches, 2 pair of blue grey yarn stockings, half worn shoes with hob nails in the heels and toes, a small felt hat, a large good axe, and a new HEMP SHEETING WALLET with a patch on one end…
March 12, 1751
Lost on the 3d instant from a roan horse a Wallet, of tow linen, which was tied behind the saddle, in one end was Another Wallet of ovenbirds,, and at the other end a bundle tied up in a blue dukes pattern handkerchief, containing a new fine white shirt, and two pocket books, one covered with parchment, enclosing sundry papers of value to the owner, the other with brass clasps, with divers papers also… Oct 10 1754 Run away on the 19th of sept. last..an irish servant man named Patrick wall…hd on when he went away, a grey kersey jacket, and a linsey woolsey jacket under it with stripes across the breast, two check shirts, a pair of lue cloth breeches, blue yarn stockings, and old shoes, with old steel buckles: Also a pair of tow linen trowsers, which he made into a wallet, and carried a blanket in itApril 23, 1752 Run away on the 19th inst….A native irish servant lad, named daniel Coffey..had on when he went away, A new jacket, of a dark wine stone colour,home made, without pockets or flaps, linen with new linsey, of the same colour, with white metal buttons, a middling flax shirt, tore at the wrist, good new trowsers,somewhort, a pair of shoes, newly half soaled with nails in the heels, a sheep skin apron, and a little Wallet, the one end plain cloth, and the other twilled, with the letter D on the twilled end
Benjamin Allen (frontier memories by Dale “the man” Payne) 1790’s Indian wars “ Watson had a beautiful wallet of corn. The Indians just pourer the corn out. They didn’t even let the horses eat it.

So now that I’ve shown you some period examples of the use of wallets here is some of the ways I use them. The largest wallet I carry is almost 6 feet long by 30 inches wide and the smallest is around a foot long by 4 inches wide.
Ok 6 feet sounds crazy I know but hear a brother out. I have seen references to large wallets and found that this size is very useful. I sling the wallet over my shoulder with my gear on one side and food/blanket on the other. I then either wrap the wallet on itself or tie it at this point with a piece of rope. The whole thing is then hung at “haversack” level or high in the arm pit. This with the width of the fabric acts as a wide strap and allows my entire gear ride at a comfortable level and not cut into my shoulder.
For a day hunts or when I’m hunting out of a base camp I use the small wallet (12 by 4) as a type of haversack. I simply carry rations ( parched corn, jerky, chocolate, a tin cup) in it draped over my canteen strap so I can carry all I need to eat while out on a day’s hunt.
So I know if you’re a haversack fan this wont change your mind….but just try it. Wallets rule and no amount of CLA razzle dazzle will ever make the use of haversacks documentable by non military folks. Now excuse me while I get back to finger weaving a haversack. Brown raw silk and a copper button I might bead a hunters star on it….it’ll totally sell, I’m such a whore.
Posted by Nathan Kobuck at 2:53 PM