THe Coon skin cap....how to Fess parker up your headware in a documented fashion 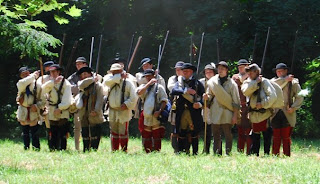 Me wearing the cap in Boston with the Augusta county Militia....yankees dont like it when you show up to church wearing a clout ,matchcoat, one shoe and Fur cap... 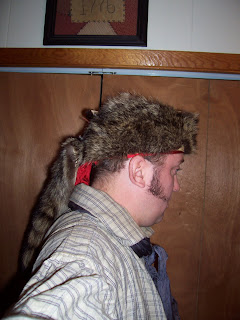 Side view of my cap over a silk scarf 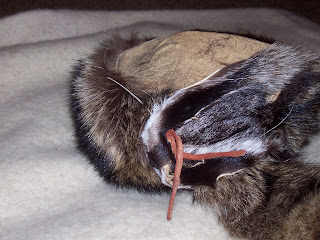 Back of cap showing tie 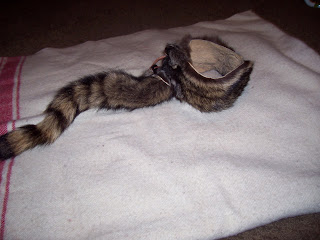 
So a few years ago I went on a tangent where I started finding all the documented styles of fur caps you might find on the 18th century backcountry. I found some killer images/original styles of fur caps that seem to be pretty common (working on less country one right now blog to follow lol) One mention that stuck in my head was made by George Fearis. In the Draper manuscripts Fearis mentioned that an Indian he saw shot was wearing “a coonskin cap on his head with a long tail hanging down”.
To me this seemed to line up with the description of Brady’s rangers wearing Raccoon caps to look more like natives. I found a few more references to raccoon fur caps being worn so I decided I’d try and make one. So rather than reinvent the wheel I based my cap off a few extant Otter turbans with 19th century attributions as well as an early (17th cent ) image of a native wearing a turban.
I got a pretty large alum tanned raccoon skin (next one will be brain tan) I figured out how wide I wanted it and divided that in half (a) and drew a line down the center of the skin (using the nose as a center point) Half of (a) went above the line the other half below and trimmed off the excess. I secured it in the back thru the eye holes with a leather lace so I could adjust the size of the cap.
I’ve worn this cap a few times in the winter and worn with a silk scarf keep my head pretty warm. Ok but I’m not gonna lie it looks freakin weird. I have a hard time linking the stuff I’ve read with what looks “normal” to my modern mindset of what I should wear at events. That being said this is also an arguable cap for someone doing a Native portrayal as well. I mean a lot of the descriptions I found for this were on natives. A LOT of natives in hat/cap info out there , just sayin. But there ya go My take on the 18th cent native coon skin turban. Flame away
Posted by Nathan Kobuck at 11:15 AM