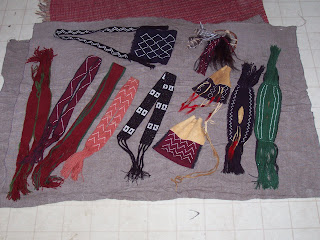 Some of the woven stuff I cranked out over the past few weeks....next tumplines 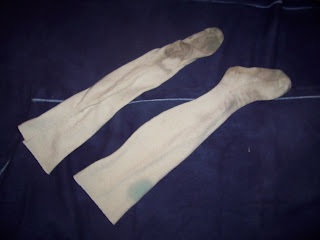 Bag hose.....these things rock...if you can sew a running stitch and use a tape measure you can have correct stockings

First off I'd like to thank all the folks that stopped by my table at the Greensburg CLA show. I'm really amazed at all the people that are actuly reading this thing. The show was awesome and I got to sit down with Tom Conde for some weaving talk and picked up some pointers on beading. I was also set up next to an awesome young blacksmith Jed Wray. This guy is doing some great knives and tools and I'm hoping to have some of his stuff in the near future to review for you all.
THe high point of the shsow for me was looking at Fred Griser's (sp?) with ALan Gutchess. Alan pointed out some really cool details on a few of fred's guns and I was able to handle a German Import Buck and ball gun. From Alan's research it's a weapon you'd see in the hands of alot of common folks heading west. that being said Alan is a bastard and talked me into one....SO my kids should have a nice Guthrie knife, axe and gutchess gun to look forward too, I'll be dead by then lol and i still need to pay off my type G anyhow....
SO The temp is starting to drop (again) so Its time to start thinking about cold weather gear. The most important piece of gear this time of year is the stuff on your feet. Shoes are an odd deal…at this point I hate fugawee’s…..I only know a few ppl that like these but personaly I found they didn’t hold up well. I also tried the shoes put out by /carried by flying canoe traders. The FC shoes are ok for awhile but have all kinds of construction errors and weirdness in them. But they are way more comfortable then the fugawee’s in my opinion
The Robert Land shoes are ok for me for around a season but if you do much walking in them they fall apart rather quickly. The caveat here is I do a lot of walking/treks in an area that is FULL of iron ore/rocks. So my shoes put up with a lot of wear. If you don’t do much trekking these shoes should be perfect for you in both wear and construction (to a point).
Well I guess I should just get down to brass tacks and focus on stockings….Like I mentioned in an earlier blog Chris Utely stockings are pretty awesome and if your doing more walking then from the car to the campsite they are right up your alley for knitted stockings.
For awhile I was a fan of Paul Meekins stockings but that lasted until I walked 10 miles s in them. While they look good they sucked for walking. When they got wet they acted like sandpaper and killed your feet. (Worn as a second layer they are great). This was the problem I had on the Brandywine walk. I knew they’d eat my feet if wet but I ignored it and well…..it sucked. SO my meekins stockings are now stocking sleeves for a linen waistcoat or going to be stocking leggings.
So honestly the best stockings I’ve worn during an trek/scout/march I made myself. I picked up a pair of stockings based off the Kannick’s Korner Pattern from Travis Crowder a few years ago and they have been the best pieces of footwear I’ve ever worn. (chris’s stockings coming in a very close 2nd)
Travis used a Jersey Knit organic wool from a vendor he found But man I cant say enough good things about these stockings. The fact he used a knit fabric allowed them to stay up when I was wearing them and the construction kept them from causing me the 1000 blisters I found with the meekin’ s knit stockings.Using his pattern and fabric I sewed myself up a second pair of stockings and 4 years later both pair are still in good shape.
I also made a pair of stockings from this pattern from some hemp cloth in a Jersey knit and they worked out great. Summer weight stockings that kept me from getting blisters and were really nice in the middle of july under a pair of leggings.
So for around $40-50 (20 for the pattern 20 for the cloth) you can make yourself a few pairs of awesome stockings that will last awhile and improve the look of your kit. The Kannick’s Korner Pattern is also in a packet of gear for women so if you phrase it right your wife will think your buying her a set of patterns and you’ll get bonus points “I just need to try this pattern out first honey before I sew up your stockings”.

Near Sea Naturals Source for the organic jersey knit wool
http://www.nearseanaturals.com/
Posted by Nathan Kobuck at 9:55 AM