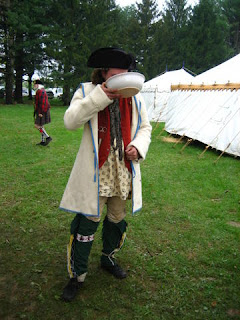 My Blanket coat and punch bowl....great way to stay warm in the morning 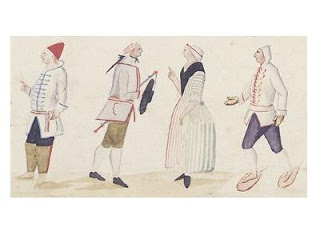 IMage of Canadians....note edging on coats and closure with ties 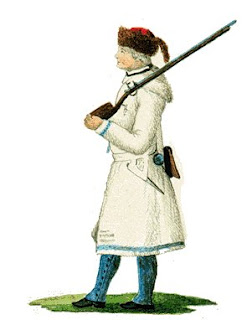 Image of British soldier in capot/blanket coat.....probably close to what John Henry wore 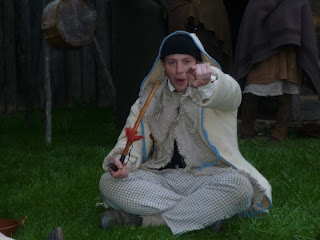 YOU NEED A BLANKET COAT!

This weather is weird. I swear it’s been fall for like 48 hours so far. The rest of the time the temps jump between freezing and the 90’s. I know I keep griping about this it’s just I’d like a season between august and 3 feet of snow. I should feel like watching zombie movies, deer hunting and getting ready for a winter hunt. The best season to be in the woods is when the message boards are full of people fighting about camouflage and loading blocks.
I picked up a killer traine/toboggan made By Mike Galban (for you southern guys a toboggan is a sled not a hat) and a pair of snow shoes. I have my winter mocs almost finished and leggings cut out. And it’s really tough to get to sewing when it’s 65 degrees outside and the trees in the yard are full of leaves. Argh….
So One project I’ve been fixated on lately (among the 27 other projects A.D.D. sucks) for this fall/winter season has been a new blanket coat. Ok not for me…well kinda….Ok hear me out. I have a killer blanket coat that like most of my clothes I got from Travis Crowder (it’s awesome to have friends with OCD/ADD and make historic clothes) The Coat was made from a Whitney blanket and is based off a few images (I’ll cover in this article). It Rules…but….I’ve found a number of other info on Blanket coats so I kinda want one of each….sick I know. I also think these are an item that is way underrepresented among “backcountry” folks. Matchcoats are great but….sleeves and hoods are greater.
Ok First off let me clarify the difference between a capot and a blanket coat…..99% of the time nothing. From what I can tell blanket coats/capots/cappa coats/capos are all an over garment cut like a coat and in many cases have a hood attached. I feel (****assumption***) that the big difference between the two might simply be the material they are cut out of. Blanket coats cut from blankets and capots/cappa coats/capos out of standard cloth.
Man I can feel the hate mail starting already…..Ok These items are worn by Both French and “English” folks in the backcountry and as a result are items Natives in both spheres of influence adopt pretty quickly (much like knit caps, leggings, Moccasins and breechclouts)
Description of Paxton boys
“dressed in blanket coats and moccasins like our Indian traders or back country waggoners”
AT Fort Pitt/Vincennes/kaskaskia we can see these items being purchased by English hunters along with other cold weather gear:
John Hamilton Jan 4 1768
To the following goods at Fort Pitt
1 pr shoes 10/
1 pr leggings 7/6
1 blanket coat 32/
1pr Mittens 4/
One thing that I found interesting is that the blanket coats are being made “in house” so to speak. Tailors at the fort are making the blanket coats:

The papers also go on to give details about just what type of cloth these are being made from or what types of blankets were on hand:
BWM papers: 1764 “118 damaged matchcoats to be made in Blanket coats”
March 13 1768
“ 18 three pointed French matchcoats,….18 ½ yards corded blue stroud, 17 ¼ plain blue ditto, 1 dirty blanket which appears to have a large red striped one but all the stripes were torn off only one red thread left at one end” (so they were thread counting in the period….sorry had to say it. Also note that there is corded stroud and plain stroud listed. Not all stroud cloth had the white list edge/stripe…..but that’s what the cool kids wore)

Some runaway ads also point out the types of blankets used in Blanket coats:
WARWICK, November 15, 1775. RUN away from the Subscriber's Plantation in Prince Edward County, on Saturday the 11th Instant, four Negro Fellows, viz. PRINCE, CATO, CHARLES or TRASH, and BILLY BURTON.-…... All of them but Trash were clothed this Fall in Dutch Blanket Coats and Breeches, Trash had Clothes such as Water Negroes generally wear,

There is also small mentions of other colors from a number of sources. Famed Ranger Sam Brady was spotted wearing a “sky blue” cappo and in his Interview Benjamin sites mentioned a neat story about a friend wearing a possible BROWN cappo :
“The other Indian caught him by the cappo, and tore off a great slit. As he passed along he came to a great log and threw himself into the forks of it. His cappo being of the same color, he heard the Indians run along and back without seeing him.” (I know some of you will now probably consider making a capot/blanket coat because of that quote….awesome)

Sites also comments a little more on their use:
“I bought a cappo of Blackfish, that I had to freeze, to get the lice out.Broadcloth”. (I wore one full of ticks the other day does that count?)
“the Indians frequently wore…cappos, etc on their scouts. The one that killed Uncle David Jennings had a cappo and cocked hat…”

And for the other Camp another mention of a white blanket coat from John Henry who was on Arnolds campaign into Canada:
“having a fine white blanket coat, and turning my cap or “bonnet rouge” inside out, the inside being white, made me as it were, invisible in the snow..” (is that describing a lined canadian cap?)

Now….construction, Like I said I cheat I have a Crowder that lives on my other couch and sews clothes for himself that he grows bored with and gives to me. The pattern He used for my Blanket coat started out life as a La Fleur de Lyse “capot” pattern . Travis Did some tweaking cut off the overlap so it tied close and bound the edges with blue tape. This style binding can be seen in an 18th century image of Canadians wearing capots. For a native Capot/blanket coat James Smith had a “tinsel laced cappa coat”.He also shrunk the cuffs from the massive early bucket cuff style.
SO this is one route to go and to my knowledge is the only good 18th century capot/blanket coat pattern. Another route is one suggested to me By Ike Walters a few years ago and he did a write up and that shows you how to adjust a standard coat pattern to a capot/blanket coat. One thing to keep in mind when doing this is that you should choose a coat pattern from your time period. Images of 1750’s capots look different from 1770’s styles just like the cut of a mans coat.
As for a source for commercially made capots/blanket coats…wel flying canoe traders sell an early capot but other then that all I’ve seen are 19th cent knock offs and weirdness. To be honest the flying canoe ones IMHO need some work (but I’m not a big fan of machine sewing).
As far as use in the field goes….I’ve found them to be great to wear all year round. Layered with other clothes in the colder months they cant be beat. They are great at keeping you semi dry in spring/summer showers. In fact they are a great item to carry in place of a blanket or 2nd blanket. Well I should be weaving or sewing or reading or writing……ADD sux