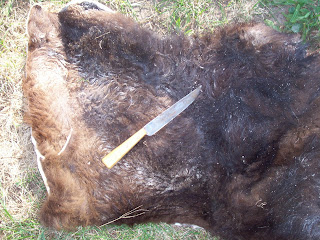 tools of the trade...trade Knife and a section of buffalo hide 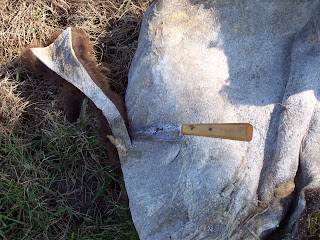 the french scalper folks..It slices, it dices it cuts Buffalo hides into tugs 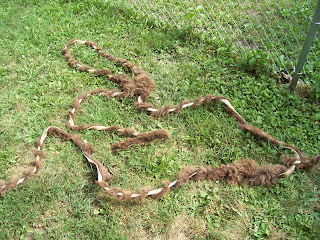 Section of tug cut from hide 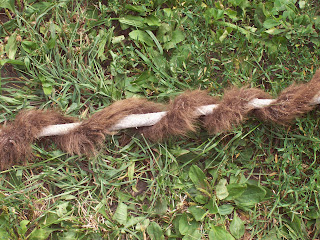 close up....the twist seems to give it some strength


So I decided that one of the items I needed to carry as a hunter was some buffalo tugs. Buffalo tugs are “ropes” cut out of green buffalo hides that seem to be a common field item used by market hunters/natives in the 18th century. They were used to carry gear or to make impromptu pack bags to haul meat back to stations. While these items aren’t made to last they would be a common item Hunters of the period would have made/used so I decided it was something I needed to try for myself.
I picked up a green hide from a local Buffalo ranch and made sure to go over the hide to make sure it was fleshed and dried to my satisfaction. I know ones done by a hunter may have been totally green but I wanted to be able to use these tugs/bags for a few demos. I’ve found that a dressed untanned hide can last at least a season. I then halved the hide. The lower half I cut into quarters to have smaller pieces to work with.
I took a quarter section and began to cut a inch wide tug out of the hide in a spiral. From this section I was able to cut out 30 feet of tug. I then stretched the tug out and used my tomahawk handle to twist the tug on itself. This is a technique I have used in making natural cordage and felt it could help the strength of the tug. And bam I now had 30 feet of Buffalo tug just about the most PC rope for an ohio country camp you could find..
I cut out another quarters worth of tug and twisted it but this was for more then rope. I then took a section of the hide about 24 inches wide 40 inches deep and folded it on itself (hair out) and using my knife as an awl punched holes on each side of the hide and laced it up with the tug. This pack matched up to the descriptions found in the draper/shane interviews on how hunters packed meat back to camps. I found that after a summer of hauling gear/meat in this pack with a tumpline (hoppus) it’s still in pretty good shape. Also I used my own tumpline but there was plenty of tug left over to make an impromptu tumpline out of this rig.
As far as shelf life of a tug....I made some in early July and used them to haul stuff/pack gear all summer long and they still are holding up pretty well and This was with Almost daily use at the Historic site I was working at. To store them for a long period of time I simply make sure they are dry before I store them and pack them in a garbage bag in my attic.
On a side note I did find a few images of what may be buffalo tugs in use as powder horn straps and mentioned as being used to tie on a matchcoat. I’ll post those and a pic of the buffalo pack later today when I dig them back up. So many files of stuff so little time.
Posted by Nathan Kobuck at 10:12 AM