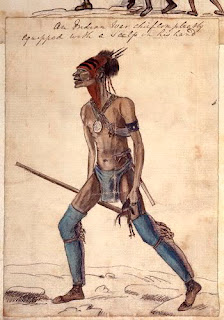 I bet that gun weighs around 5 lbs.....Hey is that Sluder? 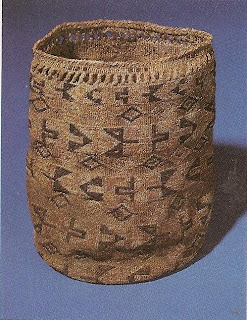 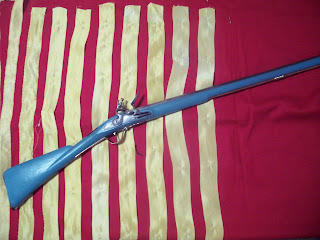 My painted Gun (and matchcoat in progress...No Ike it's not tear stained after the steelers loss)

What was I saying a couple months ago about missing winter? Man was that dumb. I don’t mind the snow but this ICE is horrible. Since the 1st of the year I’ve been going 24/7 it seems with weaving/sewing to fill orders as well as hunting and getting my Stroud cloth production going full bore for the market fair season. SO far the only New Year’s resolution I haven’t kept up on has been this thing.

A few weekends ago I headed over to Lewisburg, Pa for the 18th century Artisans Show and man am I glad I did. John Getz and his crew put on a great show and are awesome hosts. There was a great collection of Guns, Red ware, Painting, woodwork, horn work and originals. There were around 1600 folks that came thru (would have been more but a Saturday ice storm turned away some folks) . I met a lot of folks who have been reading the blog and they had a lot of nice things to say .

A piece of gear I was able to finally get my hands on was my new Type G or “Carolina gun”. My gun was made By Mike Seidleman of Virginia. I met Mike a few years ago at the school of the long hunter and have been bugging him about trade guns ever since. Mike likes to make trade guns/parts guns and does a very good job at it in my opinion. My gun is .62 with a 44 inch inch barrel and weighs around 5lbs. The only thing I’d change about the gun is that I should have had the rear site put on but I intend to pass the gun back to Mike asap to get this fixed before spring gobbler.

I’m the third or fourth guy in my crew to pick up a gun from Mike (Carolina gun crew is still growing) and everyone has been very pleased with his work. He normally stocks the trade guns in beech but I was in a hurry so he stocked mine in walnut which hurt his brain. I also hurt Mike’s brain by what I did to the stock…Paint it Blue. I painted it Blue based of the description of the Gun’s in the Williamsburg Arsenal. If and when I order another G I’d have it made with a beech stock and leave it unfinished but for some reason I just had to have a blue gun. Maybe to offset my Brown hunting shirt….

I took the gun out to shoot in the other day and put 25 shots thru it at 50 yards. I moved the powder charge between 65 and 85 grains but settled on 65. From the bench the gun seemed to shoot consistently an inch low and to the right but I’m going to wait until I get the rear sight put on to mess with it. I only wadded the ball with leaves (no patching) as I haven’t been able to find anything about folks patching smoothbores especially natives. I’ve found references to folks shooting half loads, chewed balls even lock bolts but nothing on patching.

I think this is due to the fact that these guys weren’t going to a rendyvous blanket shoot to break clay pigeons or split a shot on an axe blade they were aiming at a dinner plate sized area on a deer/bear/buffalo/person for a kill shot. If you know where your gun shoots a lot of times that’s more important then a little piece of cloth.

I had a few question from people on pieces of gear I carry and why. One question that came up a few times was why I carry a small wallet as opposed to a corn quiver for rations. SO I thought I’d go over some info on corn quivers and what they really looked like in the period. Many folks are familiar with the 16th century quote on the use of Corn Quivers:

“Brought with them in a thing like a bow case (which the principle of them had about his wait) a little of their corn pounded into powder, which, put to a little water, they eat.”

SO somewhere along the line this quote has been used to justify the use of the “corn quiver” we have all seen (or owned I admit I’m guilty I had one). As a person who looks at a lot of native narratives and extant artifacts this idea that this quote translated into a linen pouch really made no sense to me. A common item like a corn quiver should still exist somewhere. The idea of the VC rice bag as a native corn bag just didn’t add up. Well one night while looking at some images of gear in French collections with Crowder a few items stood out that…well..Made sense.

In the “Patterns of power” Catalog an object popped up.( a small twined “Basket” is shown from a European collection (Patterns of Power, Page 83) The pouch matches up to other period examples of twined bags/baskets in that its woven in the round and matches the “corn quiver” description. Also after relooking at some info I hadn’t looked at in years I found a similar twined bag shown on the Nativetech website http://nativetech.org/weave/falseembroidery/index.html these bags look nothing like the modern “corn quiver” we see used at events. What also helps is that these bags when collected were noted as carrying corn meal.

SO for someone doing a native/French impression one of these pouches would be totally correct to carry. Also for any aspiring craftspeople out there these things aren’t that hard to make (just time consuming) so if anyone is looking for a niche market start twining (this guy already has too many projects to finish lol)

This was great for my native kit but I needed to find a documented alternative to the VC bag. while looking I came across this excerpt of Benjamin Allen’s interview in “frontier Memories” by Dale Payne (come one folks if you haven’t read Dale’s books then you should be shot if you post anything negative on any message board. In fact Buy his books and take a week off the msg board world and read them! It’s Ok I’ll wait…go do it now…): Watson had a beautiful wallet of corn. The Indians just poured it out. They didn’t even let the horses eat it and just took the wallet along.

To me this showed both the use us natives and backcountry folks using wallets to carry stuff (didn’t say haversack of corn folks….admit it you use it cuz you want to not because you can document it….if ya cant document it don’t fight it just say you want to use it. I’ll use my seinfield voice here “And whats the deal with haversacks with pockets in them anyway?”) More importantly this quote showed the use of a wallet to haul corn in by a backcountry person.

Why do I mention this? Well As I’ve shown in a past blog Wallets came in all size. So to haul rations in I used this description and the various size wallets to base my use of a smaller wallet to carry parched corn/jerk and sometimes hard bread in (i.e. all the rations you would carry in a haversack in the military). I simply drape it over my belt in the back or over my canteen strap. This allows me to carry enough food for a day or two and cuts down on the amount of straps that so many lament in this hobbie. (ya got your shot pouch strap, your powder horn strap, the game axe strap, your possible bag strap, your haversack strap, etc…. )

SO before the hate mail starts like I stated I used to own a “corn quiver/VC rice bag” and it was awesome. The point of this weirdness is to share some info I found after that you make the call for what you want to do for your gear. As far as other self promoting weirdness I’ll be giving a talk on 18th century Tattoos at the School of the Long hunter at Pricket’s Fort on April 1st. The School is looking to be a pretty good time again this year. Mark Baker is giving the 3rd part of his series “the Natural Man” there will also be talks on Brain Tanning, scouts and spies, Indian Dept. and Plott Hounds. I should get back to sewing my tear stained matchcoat....
Posted by Nathan Kobuck at 11:12 AM