what I did on my summer vacation.... 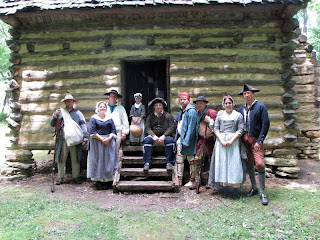 Some of the Cabin Program crew 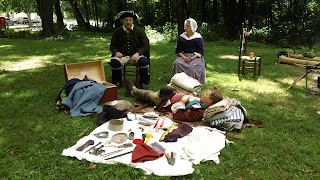 The Byerly's and capt Krause chilling next to my trade goods 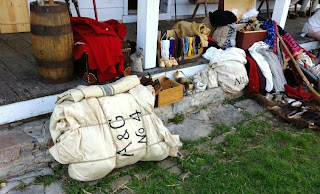 Display of trade goods at Fort Fred...need a blanket?


Ok so it’s been awhile since I posted anything (and believe me I’ve heard about it)I had a few posts started but a child + a glass of water + a laptop = lost research. So let me recap my summer….I spent a lot of time in the woods, I didn’t do many events and I got Married. After 8 years I finally tied the knot. So THAT took up a lot of my time.

So I thought I’d take the chance to add some more info from a Northern Perspective to a blog posted by my friend Jason Melius about natives in coats  . One of the standard “I needs” for folks doing Native impressions is a British military coat.  The “trophy coat” has become a sort of standard piece of gear in many camps (I blame Buxton…but then again I blame him for everything. Steelers didn’t go to the superbowl…Buxton did it) Most folks will dig out or quasi cite the James Smith account of the trophies being brought back in to Fort Duquesne as the basis for this (while also ignoring the canteens on the list, weird…) Many folks will then go to shoot/stab said coat because “he didn’t need it anymore”. I’ve even seen folks bead the “bullet hole” to extenuate  it and make it more “native”. Ok let me join in the “Friends don’t let friends wear trophy coats” chorus.


Ok So I’ve already posted a lot of info on blanket coats/cappa coats/capots. Super common trade items, pop up in a lot of accounts, kinda hard to screw up. Now I’ll post a little info on the common “coat” on natives.


Goods sent up River Kentucky under care of David Hendricks (1753)


Account of their losses of George Croghan and William Trent, June 14,1756


Coats also seem to make to their way into the descriptions captives give of Ohio country natives:


John Mcullough 1756:  We met an old indian whose dress made him appear very terrifying to us ; he had a brown coat on him, no shirt,his breast bare, a breech-clout, a pair of leggings and moccasons—his face and breast painted rudely with vermillion and verdigrease…


Around the same time Mcullough was running to into scary fellows near Fort Duquesne  A fellow near Bethlehem, PA describes intelligence he received on a Lenape coming back from Fort Niagara:


The practice of wearing coats by “French” natives was noted by Peter Kalm earlier in the decade:


The confederates of the French, had already begun to dress like the French: the same kind of jacket and vest, while on journey’s they wore the same red cap or hat.


And sometimes the mention of a coat on a native is buried in the details like this little tid bit from John Knox:

Mentions of coats for Natives in the Sir William Johnson papers give some nice detailed info on the color/cloth of coats worn by natives:


1 Silk Grogram D°: with Gold Buttons to the Chief Onondaga.


Made up clothing, such as laced coats, laced jackets, and embroidery, which may be purchased at second hand, well cleaned


So aside from tailors making coats out of the tons of cloth/buttons/mohair etc being shipped to the fort. It seems ready mad clothes were also on hand for the Trade. Listiings such as “boy’s green jackets” or “penniston coats”  pop up through out the ledgers.


This entry is kewl not only because of what old Horsehead purchases but the fact it shows how often some native names are reused.  Another Capt Jacobs was killed at the attack on Kittanning or Gibson bought a coat for a zombie. Either way it’s sweet.


Now another part of this “coat” equation That Jason nails down in his posting is the LACK of info out there on natives wearing waistcoats. Generally when you see a waistcoat on a trade list it’s given WITH a coat. For some reason the waistcoat by itself has become another go to item for native reenactors. I chalk this up to the general fear in the hobby by folks to wear sleeves (I once saw a guy wearing a sleeveless hunting shirt…it was weird)  This may also harken back to our collective memories of all natives in westerns attacking forts wearing leather vests  or the paper bag vests we all had to make in school at Thanksgiving. My point? Just don’t do it. Buy a coat, make a blanket coat  Dare to be common ppl!!!!


So shameless plug time I was able to make it out to Fort Pitt a few weeks ago to check out the New Exhibit on “Unconquered”  for a film/history geek like me It was killer. Come on Boris Karloff pictures next to an original quilled knife sheath how can you beat that! If you make it out to Pittsburgh be sure to check out the exhibit It’s worth the trip. Also I’ll be set up in October at the  Fort Roberdeau Market fair and Rifle Frolic. Sinking Valley in October is a great place to be (  website http://www.marketfaireandfrolic.com/ )  I’ve also started volunteering at the Fort again. The site has a new director/staff  and it’s looking to become more reenactor friendly. I may be doing a Moccasin workshop there this Fall so if your interested drop me an email. OR just get to the Fort!!!!

Jason blog An awesome site for research on all things southern   http://aparcelofstroudsduffieldsblanket.weebly.com/
Posted by Nathan Kobuck at 8:21 AM