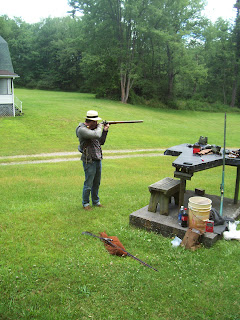 
The weather has been awesome. Kewl nights and warm days with a constant breeze nice to hang out in and great for sleep.  It’s been A killer early summer…A few days ago My friend Horn Smith  Mike Burke Stopped over for a few days to chill out and shoot in his rilfle Gun. SO we spent a killer afternoon doing nothing but shooting and talking history. Honestly I wish more events were that focused. Live fire and history….yeah it makes ren fair rat catchers and buck teeth that much weirder.
SO to stay on my camp life focus I figured id talk about camp gear.A big Part of camp life is cooking. Lets face it ya gots ta eat. For most of us in the woods we either carry a kettle of some sort or a skillet (From what I understand Bacon is now the foundation of the food pyramid…Bob Browder told me that once in a bacon induced haze)

So part of this odd journey for me has been a steady evolution of cooking gear.  When I started reenacting at 13 the first group I fell out with good old Fort Roberdeau had a slightly odd idea of camp cooking…we ate sandwiches a lot. Yeah around noon you went to the camp kitchen and made yourself a cold cut sandwich. Camp cooking gear was a giant enamelware coffee pot for coffee, donuts in the morning, cold cuts at lunch and you needed a wooden bowl, fork/spoon (of any sort) and plate (all from townsend and son btw) for a diner of some oven cooked meat dish.  At 13…I knew something was wrong.
I started my break away from the norm at this point…Hardtack, store bought jerky and brick tea for me. Make horrible tea in a tin cup over a fire I made myself with a smoke and fire flint and steel kit. I was the MAN! Of course after this I followed all the new info….Personal corn boiler, Learned to make my own Jerk, Learned to make “ash cakes”, Tea was always horrible…. A lot of this info I picked up from Baker’s articles in copies of Muzzleloader magazine my friend/mentor Pete Dobbs had lying around his Log Cabin/shop. He loaned me his copies of Baker’s videos and the volumes of books he had on the shelves in his home. Pete was the first person to help me translate what I was reading in narratives into skills I could use in the woods. He never discouraged my drive into getting better at anything from clothes to skills.

This along with constant reading and trial and error (also the support of the guys in my Boy Scout troop…troop 103***personal editorial   If you have a son I cant say enough good things about the boy scouts. This is coming from a dyed in the wool godless liberal.  Support your local Scout troop just giving a demo on how to build a fire with flint and steel at a meeting can be the spark a kid needs to show them history in a way school never can)
So along with early realization that sliced turkey was not the common food of a Pennsylvania ranging company I learned that correct Camp gear is super important to nailing down the right tools of the past. One maker that has come to the forefront of this in the past few years is Shay and Kelly at Hot Dip Tin. I first became aware of their company while I was on a powder measure kick. As I’ve stated before I become fixated with an esoteric subject then jump into it as deep as humanly possible. I’d seen that they started making tin measures so I ordered a few along with a snuff box and Ligonier tin cup (btw its pronounced Lig-on-ear   quit trying to French it up)

All the items were made with detail in mind. The cup itself blew away a lot of crappy makers I’ve seen. Over time I had to pick up a second cup as I used one as a spittoon and after the first month I was very aware Even I wasn’t gross enough to ever drink out of the cup again(for the record I thought using a period cup made spitting in the living room less gross….my family informed me that it did not…I now plan on buying one of his 19th century spittoons…Yeah I’m retarded)
Anyhow….The canteens, kettles and other items I have had the chance to handle from HOT DIP TIN  have all been sweet.  I’ve spoken to a number of friends who have purchased items from the company and have had nothing but good things to say (the Fincastle militia folks, Fort Dobbs Garrison, Va regt.) For me the thing that sets them apart is the use of period materials as well as period construction techniques. Come on folks why do you drop 1200 on a gun and $300 on a quilled knife sheath only to put a crappy knife in said sheath, buy a mass produced shirt and use tin items made in….china a few months ago. Shop smart, shop S (as in Shay) Mart!

So Shay being the good sport he is put up with my weirdness for a few questions about his products:
BT :So what made you do the jump from 19th cent to the 18th?
Shay:  I was offered a job at an 18th century historic site as their tinsmith.  That meant I had to demonstrate for the public making everything with hand tools.   Most manufacturers of tinware today are actually modern sheet metal workers using 20th century equipment. If you use a machine made in 1945 to make a cup It will look modern.  I am willing to go to all the extra effort to make all my items unique.

BT:  What’s your research process when coming up with a new product?
Shay: Almost everything I make is based on archaeological excavated artifacts.  Someone will say “Have you seen that cup they found at site X.”  That leads to an internet search to find research reports or a visit to university or museum.  Then there is the layout to determine if it can be made using 18th century techniques.  And finally make several to work out the bugs to make sure it looks exactly like the original.

BT :What’s your favorite 18th cent project so far?
Shay:  The Tin Kitchen/Meat Hastener/Roaster/Dutch Oven. Experts used to think they were 19th century but then we found the 17th century painting by Gabriel Metsu. http://www.gabrielmetsu.org/The-Cook-1657-67.html

BT: Tell me about the binder of death?
SHAY:   That binder is just the abridged version of all the images and text on my laptop.  It is easier for “show and tell” at an event or historic site but on occasion the computer has to come out to verify that I am making the item exactly as it was found.  It makes a difference whether the handle folds in or out, or if the rim has wire in it or is plain.  It helps me pay attention to details.

BT : tin fiddle, you gonna hook a brother up or what?
Shay:  Put your money where your mouth is…

BT: Tin trumpets from SE trade lists….Jason wants to know…ya gonna make them?
Shay:   I have been making the little short versions for the Lewis and Clark re-enactors.  Does Jason wear those Tallio sleeve links from ATED if so he should have a really long Tally Ho trumpet to match.

BT: What sets your stuff apart from other 18th cent goods?
Shay: Hammer marks!  Aside from the fact that I use Hot dipped tin (sheets of iron or steel dipped in molten tin to prevent rust) instead of Electroplate (tin  grown on the base metal in an acid bath using electricity, which was invented in 1890), I make each item by hand. Doing this 8 hours a day 5 days a week I am to the point where I can hammer a cup into shape as fast as the guys with the rotary machines, but theirs all look too uniform. All tin working machines were invented after 1804 and they leave linear marks on the worked surface.

BT: What goods that you make would you like to see more ppl carrying?
Shay: Snuff boxes aren’t just for snuff.  They show up in New York at the Dann site 1650, the SouthEastern Native site Chota and Fort Ligonier army dump.  They are all the exact same size.  At Chota it was found full of silver earbobs and at Gandichiragon it had a mirror.

BT : Based on research what is the most common item you make?
Shay: Straight side cups.   Those tapered mugs or tankards you see at reenactments are way over represented.  Tinsmiths were frugal with a sheet of tin since it all had to be imported from England or Germany. You can only make one tapered mug with same amount of tin it takes to make two tall cups.

BT : So whats on the drawing board for future projects?
Shay:  Rogers Island artifacts.  After 14 years of inaccessibility all the artifacts will be available to study this summer so that means the Fort Edward Canteen and Mess Kettle can be further researched.

BT: Mullets…hair style of the future for living history? If so should Ward Oles regrow his?
SHAY: Someone needs  to make that call quick.   I have been growing out my buzzed head and I am in the really awkward 1970’s Little House on the Prairie stage.  It is 5 inches in length,  all around, which means now I can pull it into a queue in back but I also have it long enough to curl my sidelocks.  If I wear a hat I look like I have wings.

BT: No really Tin fiddles? When is it gonna happen…I could be the Dave Mathews of 18th century music…it could be the copper canteen of our generation.   Do you want to go down in history as the first one to start a trend?
Shay:  I will start working on it.


So in closing if your looking for a High Quality camp kettle, common powder measure,Cup Etc etc….Check out Hot Dip Tin www.hotdiptin.com. These folks make high quality items at very reasonable costs. I cant say enough good things about their goods. Plus they are the first person who I have not known in person to survive a Q&A….so ya know they are easy to deal with.  Plus…snuff boxes…the smart mans shot pouch….
Posted by Nathan Kobuck at 12:21 PM