hitting yourself in the face with a warclub...it feels awesome when you stop 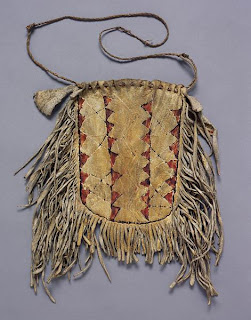 Cherokee (?) bag in the NC archives....not sure how I feel about it 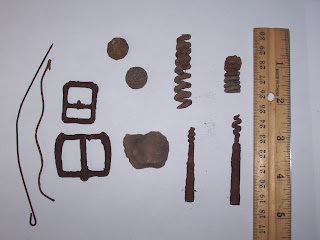 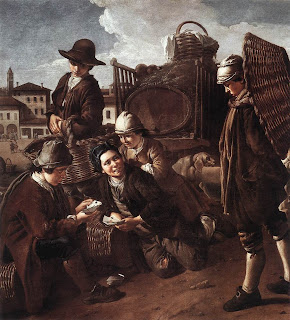 1760's italian image showing boy wearing a headscarf....not a pirate...maybe a wicker pirate
Happy New year!!! Oops I kinda missed that…and 12th night…man am I horrible at weekly blog posts. Well my hunting season was..pointless. I shot a nice 8 point the first day around 7:30am (long hunting season huh) It came in with a doe and a 10 point, but right off the bat I watched it lay down for a few minutes at about 80 yards. It worked its way closer to me and layed down again. I knew something was wrong with it so first time it got broad side from me I shot it right behind the shoulder (around 40 yards)
When I gutted it I noticed a really strong smell coming from the deer but I couldn’t find any wounds apart from where I shot the deer. Well when I started butchering the deer with my father we started seeing green specks and the stink stayed with the meat and then in the back we found gangrene. So I didn’t get a hide or the meat I just got the antlers…blah. There I was no doe Lisc., No hide and no deer meat. Kinda makes you want to go home and kick the dog. Then the Steelers lost….dont worry I didn’t kick the dog.
I’ve been spending a lot of time fighting the Horde of Squirrels this winter and realizing that my time spent sewing the super dead on winter gear was kind of pointless. All I really needed was moc liners and a blanket coat. I have become pretty good at shooting in the rain and have my kit geared towards foul weather shooting. The simple rig of gun case/cows knee and gear worn under the coat has been working out pretty well.
One thing I felt like posting was the second image I’ve found on a man wearing a scarf on his head. I’ve seen a lot of folks using the “absolute” rule on wearing scarves “pirate style” or under a hat. While I’m not a big fan of the practice I do hate the absolute rule when its simply just the parroting of ideas even more. Let’s face it the thing that turns folks off about improving is the absolute idea.
That being said if you’re at a 1770’s event in the middle of the Cumberland gap maybe the slops and the pirate scarf though both documented during the 18th century really aren’t in the right place together(just sayin). My point of this is for someone looking to document another simple head covering under a hat or in the field. Also to document that the “pirate style” isn’t the only way to wear a scarf (come on be different…do something they did now what griz showed ya…peer pressure)
I’ve also been pretty OCB about all things south eastern. As a result I’ve been putting stuff into neat little files. One thing I’ve been working on is a compilation of SE shot bags (thanks frontier folk yeah forced my hand) Jason Melius and I have been in an all out text msg war for months swapping info (and mean jokes that hurt others) So I’ve tossed up a compilation of images of SE shot pouches . As well as some original native shot bag gear.
All the bags are pretty standard but….one is from the NC archives.
It’s labeled Cherokee and is painted along the lines of some northern pieces so I have to get down and do some digging before I really make up my mind about it. Now that you’ve seen this all I ask is if folks want to try and make it 1 they don’t use tempra paint 2) learn how to hide paint 3) did I say don’t use tempra paint? And 4) just because it’s a leather bag/sheath and you paint it doesn’t make it South eastern….it could still be reenactor crap with some paint on it.
I know
that souns a little mean but I've seen alot of weirdness done in the name of the South. All kinds of twined weirdness comes to mind. Well I broke thru my mental block now Jim apple and all the other FB folks will stop yellin at me and I can hide again with my weaving and zombie movies....
Posted by Nathan Kobuck at 1:31 PM