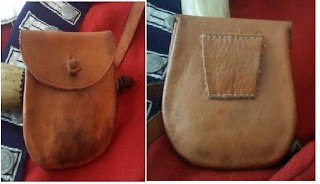 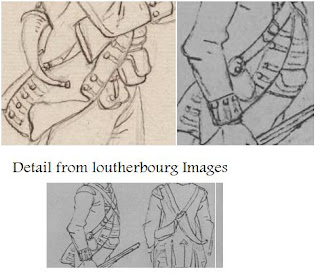 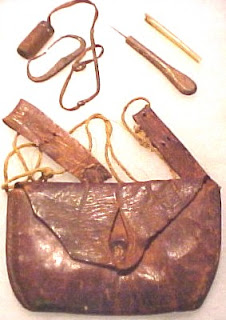 So wow two posts in a week...crazy! Ok actuly this is a cheater post. I Subcontracted this one to my brother from another mother Jason Melius. Jason and I have been talking/sharing info/ideas on period shot bags/pouches for a long time. After seeing his take on a brit shot bag in use at the Filming I asked him to do a write up on his take on the subject.
I know the main point of this blog is Backcountry/Fort Pitt related info but Shot pouches are shot pouches and every little piece of info on them can help. Plus its my blog so....Shut up. Plus with items like the lyman pouch and the undated belt pouch its cool to see that this was such a common practice.

British Light Infantry Shot Bags
When picturing British regulars at the time of the American Revolution, most people visualize mindless automatons marching very slowly, shoulder to shoulder. Students of the British military of the 18th century are beginning to understand this is very far from an accurate image. Mathew Spring, in his work, “With Zeal and Bayonets Only,” paints a picture in which the often outnumbered redcoat won the majority of battles, not with German style close order drill, but with speed, shock, bayonets and loose formations.
Along with these adaptations in tactics were adaptations in dress and equipment. By 1776, British soldiers were laying aside knee breeches in favor of gaitored trousers, for instance. The inspiration for these changes can be traced back farther. But the intent here is not a broad look at the adaptations of the British Military. The focus is on a single piece of equipment; the shot bag.
In 1771, the British Army command decided to reinstate the light infantry companies abandoned shortly after the close of the Seven Years War. An update to the 1768 Royal Clothing Warrant, the King’s uniform regulations, laid out the clothing and equipment standards of the light companies. While it is an outline, it laid the groundwork.

The shot bag appears in many forms and in many variations throughout the American Revolution. The British shot bag seems to have always been intended to be worn on a belt, or even on the powder horn strap. Tying together the above information with images by Phillip James De Loutherbourg, as well as a surviving bag of the Queen’s Rangers, a fairly accurate representation of a shot bag can be reproduced.

My interpretation of the bag is fairly simple. I chose to marry the QR bag’s body style and the bag worn on the powder horn strap of the light infantryman above. The body is slightly teardrop shaped based on the QR bag. It is constructed of 4 pieces of 3 oz vegetable tanned leather: body back and flap, body front, leather button and belt strap. There is no divider in the center, though it could be argued one could be present. The flap front has a simple tooled edge commonly seen on British leather work. The bag measures 4 ½ inches wide by 5 inches deep.

It is intended only to carry shot or ball. It is not a bag for carrying cleaning supplies, tools, whistles, cigarettes, car keys or anything else besides lead. Though trial, I have found that wearing the bag on the powder horn strap, as pictured in above images, is very convenient. The bag opening is very close to the horn spout, and the weight of the ball helps to keep the horn and bag from bouncing around when moving quickly. Interestingly, the whole rig tends to slide back and wear just as pictured in 1778 by de Loutherbourg.


Thanks a million Jason! SO tomorrow I'll have a post up on how to sew up a decorated matchcoat.
Posted by Nathan Kobuck at 12:16 PM